The Department of Law

Palin: Even Dumber than Bush:

Palin said there is a difference between the White House and what she has experienced in Alaska. If she were in the White House, she said, the "department of law" would protect her from baseless ethical allegations.

"I think on a national level, your department of law there in the White House would look at some of the things that we've been charged with and automatically throw them out," she said.

OMG, to think this woman was reasonably close to becoming Vice President of the United States. John McCain owes us all an apology. 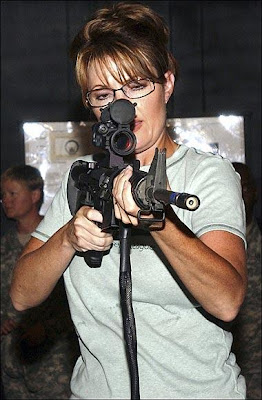 The reasons she gave for stepping down are not just contrived or implausible but literally nonsensical. She can most effectively serve the people of Alaska by ceasing to exercise the powers of chief executive? She worries that as a lame duck she would somehow be compelled to waste taxpayer money on useless junkets? In her "Don't Cry For Me, Alaska" news conference announcing her departure, the folksy non sequiturs -- "Only dead fish go with the flow" -- were like nuggets of Cartesian logic amid a tub of mush.

But I'm stating the obvious. The thing is, Palin's unsuitability for high public office has been obvious all along. Tina Fey got it right; the rest of us were far too reluctant to state plainly that the emperor, or empress, has no clothes.

There are basically two reasons the political class and the commentariat continue to speak and write about Palin as if she were a substantial figure whose presence on the national stage is anything but a cruel, unfunny joke. The first is fear -- not of Palin and her know-nothing legions, but of being painted as elitist and sexist.

The other reason Palin is taken more seriously than she deserves is that she has a
constituency. Heaven help us.

Even the stupid can have their following, I suppose. But really, George W. Bush and, even more so, Sarah Palin are clearly not up to the job of being president. In Bush’s case, there was Cheney who was actually running things. Not that that was anything short of a disaster from a policy standpoint (see Iraq), but at least the guy knew his way around Washington. But who would be Palin’s Cheney?
Posted by Dave at 7:11 AM