Eric Zorn is not happy that Sangamon County State’s Attorney John Schmidt is taking so long to decide whether to indict Sen. Roland Burris.

It's been 108 days now and Schmidt, a Republican, is still pondering.

I don't believe in rushing to judgment (and I don't happen to believe that Burris committed perjury), but come on! 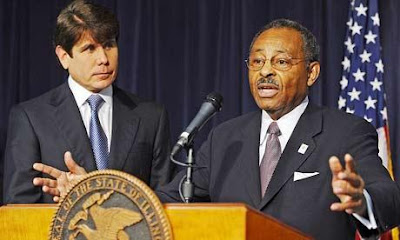 From what I’ve heard, Schmidt really hasn’t been all that interested in this thing. And it does kind of suck that the local state’s attorney has to get involved with this. Of course, conspiracy theories abound that this is some Republican plot to keep the weak and wounded Burris around to help Republican chances to capture Burris’ seat in 2010. Maybe so, but I really don’t see Schmidt as being that committed to partisan causes. Besides, Zorn lives in the Chicago area so that means he hates us here in Springfield.
Posted by Dave at 12:05 PM