Two WTFs from the court system:

In 1993, William Osburne was convicted of kidnapping, assaulting and raping a woman in Anchorage, Alaska. He spent the next 14 years of his life behind bars. Osburne insists that he is innocent, the State of Alaska has in its possession DNA evidence which will once and for all prove his guilt or innocence, and Osburne has offered to pay for DNA testing out of his own pocket. Allowing Osburne to prove—or disprove–his claim of innocence will cost Alaska literally nothing.

Nevertheless, the Supreme Court held today in a 5-4 decision by Chief Justice Roberts that Osburne is out of luck. Although Roberts conceded that “[i]t is now often possible to determine whether a biological tissue matches a suspect with near certainty,” he determined that Osburne has no right to pay for a test that could exonerate him for a crime he did not commit. Allowing Osburne to prove his potential innocence, Roberts said, risks “unnecessarily overthrowing the established system of criminal justice.”

The problem with Supreme Court decision is they often are arrived at using very narrow legal parameters rather than doing what’s right. But there needs to be a safety valve somewhere for things like this. I know the conventional wisdom goes the other way, but too often prosecutors are more interested in prosecution than justice. 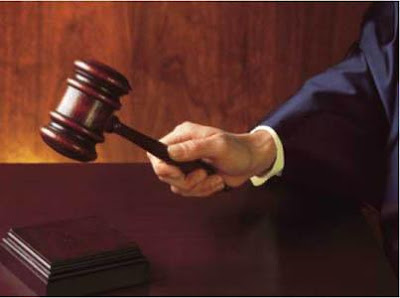 Then there’s the RIAA…

Jammie Thomas-Rasset's case was the first such copyright infringement case to go to trial in the United States, her attorney said.

Attorney Joe Sibley said that his client was shocked at the fine, noting that the price tag on the songs she downloaded was 99 cents.

She plans to appeal, he said.

Cara Duckworth, a spokeswoman for the Recording Industry Association of America, said the association was "pleased that the jury agreed with the evidence and found the defendant liable."

Money-hungry assholes. Charge her triple the 99 cents fee or something, not $1.9 million. If she had that kind of money she wouldn’t have been downloading songs for free. The RIAA business model is broken anyway. They aren’t long for this (business) world.
Posted by Dave at 12:05 PM