This may be the single best take down of cable news I’ve ever seen. And as a bonus, it’s funny!

I spend most of my workday lunches in front of the TV flipping between cable news channels. I’m just trying to get me a little information! Mostly I’m frustrated and disappointed. That’s why I wind up spending time with C-SPAN, local cable access and the channel guide. 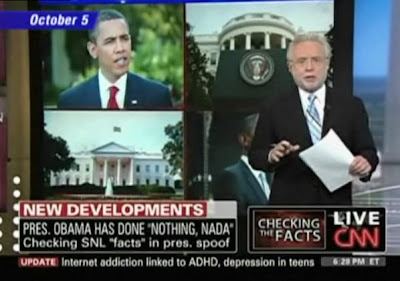 Update: This related bit from Matthew Yglesias who just got back from Europe.

I wasn’t unplugged by any means over the past three weeks. I kept blogging and kept reading blogs. I read the newspapers and I even watched the news on television. But what I watched was CNN International and BBC World News. There’s a world of difference between those networks and even the relatively staid domestic version of CNN. And at the office they had the sound on for Fox News. Bill Hemmer & co. were spinning half-truths, deceptions, and outright falsehoods at a staggering rate. Meanwhile you could see frenetic action on MSNBC and CNN and if I felt like really making myself dizzy could even follow the action on closed caption.

It makes you think about the strange influence that daytime cable news has on American politics. The three networks combined have an aggregate daytime audience of roughly zero. But even though the audience, looked at nationally, amounts to rounding error the networks are hugely popular among the tiny number of people who work in professional politics. Just like traders have CNBC and Bloomberg on in their offices, political operatives are constantly tuned in to what’s happening on cable news. The result is a really bizarre hothouse scenario in which people are basically watching . . . well . . . nothing, but they’re riveted to it. How things “play” on cable news is considered fairly important even though no persuadable voters are watching it. And cable news’ hyper-agitated style starts to infect everyone’s frame of mind, making it extremely difficult for everyone to forget that the networks have huge incentives to massively and systematically overstate the significance of everything that happens.

At any rate, it’s good to be back home but the slower pace and more relaxed and substantive style of BBC and CNN International is something I’ll miss.