Opponents of any single-payer health system here in the U.S. often point to the “well-known fact” that Canadians, faced with a medical dystopia in their own country, flock across the border to the US to get the healthcare of which they are deprived at home. I’ve even been told in person that I’m stupid for not believing this to be the case.

Well, just for the record, I post this study that “depicts this popular perception as more myth than reality, as the number of Canadians routinely coming across the border seeking health care appears to be relatively small, indeed infinitesimal when compared with the amount of care provided by their own system.” 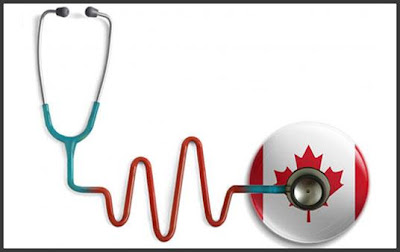 And here’s a survey that indicates Canadians are very happy with their healthcare. Another poll shows Canadians overwhelmingly prefer their system to ours.

Now having said all that, it should be noted that as far as single-payer systems go, Canada’s seems to be among the worst. Many of what problems it does have come from being underfunded. Any move to a single-payer system here should probably not look to Canada as its primary model. Fortunately there are plenty of other national systems to look to, and when that day comes, and it eventually will someday, we have lots of tried and true options to choose from.
Posted by Dave at 7:04 AM