Richard Roeper wonders what I wonder:

If you watched any football over the weekend, you probably saw a certain commercial for DirecTV once. Or twice.

For the last three years, DirecTV has been enlisting the services of actors who re-create a famous role in a familiar scene from a movie, before breaking character and telling us about the benefits of getting DirecTV.

I can't deny the effectiveness of the ads. There's something jarring and conversation-starting about seeing the still-beautiful but 50ish Christie Brinkley reprising "The Girl in the Ferrari" from "National Lampoon's Vacation," Charlie Sheen back in uniform as the Wild Thing from the "Major League" movies, or Naomi Watts (!) doing the "King Kong" thing again.

It was a little unsettling to see Craig T. Nelson as the father from "Poltergeist," interacting with his daughter Carol Anne, given that Heather O'Rourke, the actress who played the little girl, died at 13.

But the latest DirecTV ad -- the one that aired again and again over the weekend -- is even creepier.

In the spot, David Spade is playing Richard Hayden from 1995's "Tommy Boy." Thanks to seamless technology, Spade seems to be in the room with Chris Farley's Thomas Callahan III, who's doing his "Fat Guy in a Little Coat" bit.

As Farley spins around and does the routine, Spade looks at the camera and says, "Great. I'm here with tons of fun when I could be at home watching DirecTV . . . but no, I'm stuck with either cable, or that."

Farley rips the little coat, and Spade chuckles and says, "Never gets old."

It's been nearly 12 years since Chris Farley was found dead in an apartment in the John Hancock Building. Spade was Farley's close friend, but he opted not to attend the funeral. He was quoted as saying he couldn't "be in a room where Farley was in a
box."

Now, though, Spade has put himself in a virtual room with the ghost of Farley.

Obviously, permissions had to be granted and rights obtained for a commercial like this to happen. And this certainly isn't the first time the image or video of a deceased celebrity has been incorporated into a commercial. Remember the late John Wayne for Coors? Fred Astaire dancing with a Dirt Devil vacuum cleaner?

I guess it gets people talking. But I'm just wondering if there's anyone who ISN'T put off by the Spade/Farley spot. 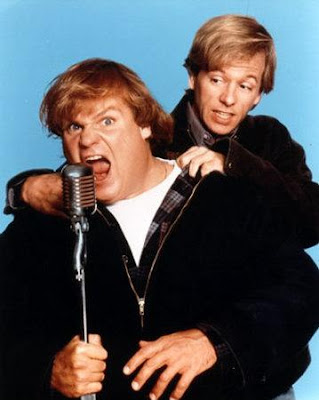 I was actually kind of shocked at the ad. It does seem tasteless for all the reasons Roeper mentions. Additionally, what was gained? While I was/am a Farley fan, particularly of his SNL work but less so of his movies, I still found the reference sort of obscure. Does even 10% of the audience get what’s going on, even a little? DirecTV and David Spade both showed really bad taste in doing this commercial.

What intrigues me about things like this is how it gets from concept, to production, to air without anyone pulling the plug. Before the 30 second spot was over, I knew it was bad. What happened during the months (or longer) of development that prevented anyone from getting how tasteless and obscure the project was? I just don’t understand how that happens.
Posted by Dave at 7:02 AM