teh
Sadly, we live in Illinois were we can’t even hope to have the media drama of such things as shark and alligator attacks. Those lucky Floridians!

But wait…we do have a bunch of deer and, well, on the Southern Illinois University campus at Carbondale we have had…DUM-DEE-DUM-DUM…deer attacks. Ahhhhhhhhh!

Check out this picture and its caption from The Southern Illinoisan.

I love it. The deer is “presumably” the one that has gone on the attack. The couple is “dangerously close to her”.

I have to assume the photographer was unable to warn out unsuspecting couple of their imminent demise because he or her was miles away using a 10-foot-long telephoto lens to get the picture.

Now I’m going to be dangerously close to SIU this weekend so I’ve investigated the best ways to defend myself in the event of savage deer attack.

The first thing I learned was not to let the deer think you aren’t bad and won’t kick its ass. 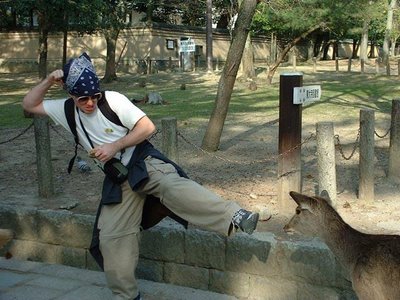 Failing that, carry a big stick and don’t be afraid to use it. 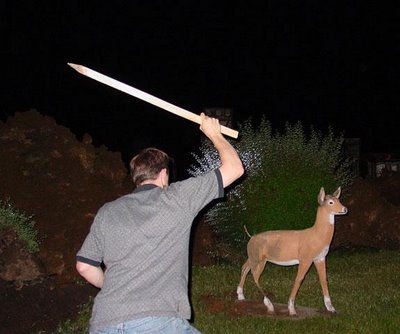 Finally, as a last resort, just get one of these kitty's. It will take care of your problem. 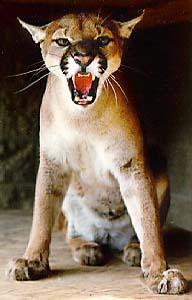 I’m headed into the belly of the beast. The war zone. The front line of the War on Deerism. Wish me well, wish me well.
Posted by Dave at 6:24 AM