NIMBC (Not in My Brave Country)

David Kurtz has a couple of statistics for comparison:

Number of Gitmo detainees that the GOP hopes to keep off mainland U.S. soil with its "Keep Terrorists Out Of America Act": roughly 250.

Number of Axis POWs detained in camps on the U.S. mainland at the end of WWII: roughly 425,000.

I really don’t understand the fear some people (read: wingnuts) say they have about having alleged terrorists housed in detention centers, prisons, what have you in the United States. I’m not talking about legal complications, real or imagined, I’m talking about a fear that these guys will somehow escape and run amok terrorizing the nation.

First, even a hardcore, America-hating terrorist isn’t superhuman. They can’t turn into The Hulk and smash (Smash!) their way out of a prison. If they could, they would have left Gitmo years ago. They don’t have super powers. And I guarantee you, there are far more dangerous and often deranged individuals already behind prison walls right here in the good ol’ USA. Hell, I used to live right down the highway from what was at the time the nation’s most secure prison in Marion, IL. The worst of the worst were there and I never missed a minute of sleep over their presence.

Secondly, we've already successfully housed hardcore terrorists in this country. Remember Timothy McVeigh? Or the perpetrators of the first World Trade Center attack in 1993? Some of the WTC attackers are still in U.S. prisons. 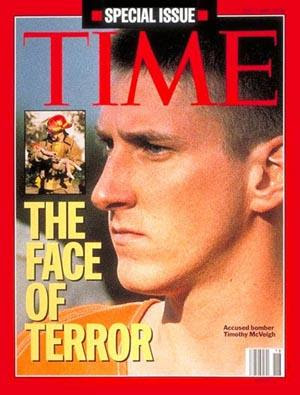 Frankly, if they wanted to build a terrorist super-max prison right in Sangamon County, I’d be all for it. More jobs for us.

Update: TMP has a copy of a GOP scare e-mail on the subject here. Notice the nce Drudge siren included. What a bunch of bedwetting cowards. Well, not really. These guys aren't afraid but they want you to be, just like the good old days after 9/11 and the run-up to the Iraq war. A frightened populace is much more malleable to their way of thinking. Who are the terrorists again?

Update II: Oh, and look at the description of one Rep. Boehner’s top 10 scary people:

One of two key financial facilitators entrusted by 9/11 mastermind Khalid Sheikh Muhammad (KSM) to manage the funding for the hijackings. Met with Osama Bin Laden and his top lieutenant soon after the 9/11 attacks.

OMG! If he smashed (Mustafa Smash!) his way out of prison he would probably roam the countryside spreading bad financial advice! The terror!

Seriously, many of the Gitmo detainees, and probably all of The Top Ten Most Scary Men Ever, are guilty as sin and should be tried and then sent up for life. But they really are no threat to us now. Their power, such as it was, came from being free men participating in a larger organization. All of that is over for them.
Posted by Dave at 12:12 PM