Tube Testing and the Age of the Mr. Taylors

I was reminded today that their used to be TV repairmen who came to your house and fixed TVs. They all faded away by the mid 70’s or so because, well, TVs mostly stopped breaking from anything other than old age. But I remember growing up during the 1960s having Mr. Taylor, the pipe-smoking TV repairman, come to our house on a fairly regular basis to fix our TV set. The set had a wood cabinet, a black and white picture, and was full of glowing tubes when you took the back off and turned it on. Mr. Taylor mostly came to replace tubes because that’s what went out on those TVs. He would show up in a white van with his logo on the side, packed with wires and tubes.

I also remember my dad and I trying to fix things ourselves before having to resort to calling Mr. Taylor. We would look for any tube that seemed dark. We would pull it out and head to the drug store where they had a tube tester machine and a supply of replacements. Often, we would find the problem, pick up the replacement and get the TV working again. But, as frequently as not, Mr. Taylor had to be called. 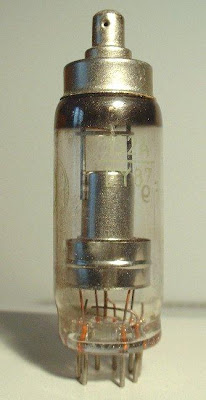 All of that came to an end when they started making “sold state” televisions. That is, TVs without tubes (other than the picture tube). By 1972 we had a solid state TV that didn’t need to be serviced as often (there were still some tubes but by then, at age 12, I was a master of the tube tester). Not only was it low-maintenance, but it was color! The old black and white tube monster became a second TV for the house (first time that had ever happened in our home) and lasted many more years...I think until about the time the tube tester machines were removed from the drug store.
Posted by Dave at 12:10 PM

What a wonderful post. It brought back memories of me, and my dad, running over to Thrifty drugstore to use their tube tester. Those were the days when you could actually fix your own t.v. set, as long as you stayed away from the main picture tube which if not properly discharged could kill you.

Father Pizors even had a story about nearly being killed by a picture tube, as I recall - along with his wise rule of "one hand behind the back" when dealing with them.

Today, TVs don't break. I have one TV that is 25 years old that still works and has never been repaired. Sadly, it also has outlived its two previous owners (my great aunt and my mother).

Bob Bradford was our TV repairman. He always came at night and usually had a beer. Later, instead of getting a TV stand, we put our solid state TV on top of our old wood cabinet TV.