Anything is Possible in Sangamon County 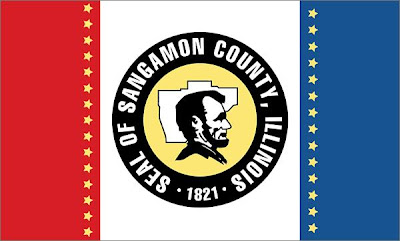 This story is very strange and also very troubling if this woman’s story of having been sexually assaulted by a Sangamon County sheriff’s deputy, while on duty no less, is true. However…

Sherry Janssen, 48, was truthful when she answered “yes” when asked if the deputy had sexual relations with her on Jan. 1, according to an Illinois State Police polygraph examiner who administered the test Feb. 27.

Janssen requested that the newspaper print her name, even though she considers herself a sexual-assault victim. She said she believes that speaking out without cloak of anonymity adds credibility to her case.

“I don’t have anything to hide,” Janssen said. “I didn’t do anything wrong. I’m telling the truth.”The polygraph examiner qualified his opinion, saying that Janssen, who acknowledges being an alcoholic, had consumed alcohol and medication prior to the exam. Janssen said she might have considered the incident a fantasy if the accused deputy hadn’t sent her a text message and voice mail hours after the alleged incident.

WTF? I guess she likes her (alleged) rapes with no strings attached. This “might” have been a “fantasy” had the deputy not followed up with a phone call and text? Huh? And just how did he get her cell phone number? He either forced it out of her (troubling) or she willingly gave it to him (strange unless the sex was consensual).

And for what it’s worth, I think lie detector tests are worthless. Might as well use a magic 8 ball.
I'm sure there's a lot to this incident that isn't showing up in the newspaper so it's a little hard to judge at this point. Still, there's enough information to make one wonder what's really going on. Given the seriousness of the accusation, I hope this is resolved soon.
Posted by Dave at 7:15 AM

One thing I wonder is why in the world the Illinois State Police are using polygraphs. They're worse than worthless; they're misleading. It's 2009 for cryin' out loud. Let's leave the witchcraft behind us.

They use it to rattle the person, in this case the accuser.

I took her "fantasy" comment to to mean that, given her intoxicated state at the time of this alleged incident, she would have assumed she had imagined or dreamed or hallucinated the whole thing except for the message she received later, which confirmed to her, after she had sobered up, that he "really had" been there.

Also, bear in mind that IF this incident truly happened in the way she relates it, it doesn't matter whether she "consented" or not; she was too drunk to be capable of giving consent.

I do agree that the results of a lie detector test don't "prove" anything other than, perhaps, the fact that the test subject has no doubts about his or her story (whether it's true or not).

What I find troubling is that the cop hasn't been named. If I recall correctly from the first story that ran on this, the woman called the police because she thought her ex-husband was missing. So, the cop arrived, searched her house, searched outside for the guy and didn't find him.

So what you have is:
-- A totally drunk woman who calls the cops for help.
--A cop who arrives, searches for anyone else who might be there.
--He finds no one.
--Has sex with a woman who is unable to give consent.
--Calls and texts her afterward as if they are dating.

This all sounds very predatory to me. I honestly wonder if they published his name, if others might come forward.

Can you imagine what a perfect method of operating this is for a habitual sexual offender.
You're invited in to women's homes, you have free reign to search for witnesses and then can take advantage of them.

I wonder how many others have feared calling authorities because they were concerned their cases might be treated the exact same way as this woman. If I remember correctly, she reported to the sheriff's department's IA division. They said they'd call ISP. They never did. Then they ask for HER DNA and subject HER to a lie detector test. What about him?

Let's not forget this all originates with the Sangamon County Sheriff's Office, a police organization with a long history of sexual misconduct and several human rights cases pending against it.

Something smells fishy here and I don't think it's her story.

Not sure what you mean by "long history". The Sangamon County Deputies that I know do an outstanding job.

If this is true, then the deputy should be punished. But, her story smells fishy to me. How did he get her cell number?

She must have given it to him.