Meanwhile, in Chile, a new governmental energy efficiency program focused upon increasing the use of compact fluorescents [light bulbs] has reduced residential
electricity consumption in Chile by more than 20%. That is not a typo-twenty percent. How did they do it-simple, they gave the bulbs away!! Consumers in lower income brackets received a free CFL for every incandescent bulb they turned in to their local utility, while those in higher brackets were able to purchase CFLs at cost.

The resulting decrease in use of electricity in Springfield would result in more electricity generating capacity that could be sold on the market. That, in turn, would mean more money for the city to either hold down taxes or implement more improvements that would benefit us all.

On a personal level, I have been using CFLs almost exclusively in my home for more than two years now. (My original blog post from that time on that subject is here and an update here.) Since then, I’ve been very pleased. I almost never have to change a burnt out bulb. I have four outdoor lights on the front of my house (two at the front door and two at the garage). When I was using old incandescents, I was changing one of these every month or two. In the last 2 years, I think I have changed just one of the four. Additionally, since I made the switch to CFLs in the house pretty much all it once, it was easy to attribute a serious drop in our electric bill the next month to the CFLs. 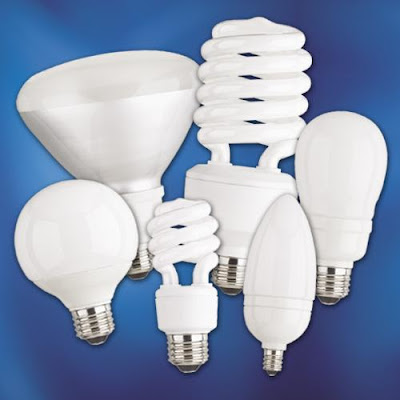 The other good news in CFLs is that over the last couple of years I’ve been able to find them in more shapes and sizes, allowing them to fit in most lamps and providing a more decorative look beyond the traditional “spiral” design.

The only downside to the CFLs has been their performance in really cold weather (outside only). If it gets down into the teens or lower, the CFLs can take a long time (several minutes) to warm up to full strength. And if it gets cold enough, say below zero, some of them won’t come on at all. But this is a minor and temporary annoyance, well worth the trade off of longer life and lower operating cost.
Posted by Dave at 7:20 AM

I too made the switch to almost 100% cfls. Not only does it save on energy, but I personally like the light that comes from it better than the other kind.

I have not had one break on me though and am just a tad concerned about the supposed mercury in them. I dont know if anyone has had a real problem with the mercury or not but so far so good.

Also, in Chicago, my alderman's office gives them away sometimes.

Most of my house has been CFLs for a while. I am going to lunch today and buy some more of the mini cfls for the decorative lights over the bathroom sink. One set of bathroom lights have the mini-socket, so I will be using regular bulbs there for a while.

For "breakage" remember there is more mercury in your teeth in filings then in a bulb. Yes, be careful but no need to panic. Funny thing was when I saw that there was only one comment, I knew it was going to RM worried about the common myth of the mercury danger. I have no idea where he gets those ideas.

Bad things, the ones currently on sale there are 40 watts, ok for chandeliers and bathroom lights. The big outdoor spotlight, was only 45 watts, mine is 90 watts. These are the first LED I have seen locally. I was pricing some online 6 months ago for 30$-50$ per. Price is going down and the technology should get better.

Ok, 1 day review of the LED, it's definitely a softer light and closer to 35 watts. Another weird thing is that the lights "glow" a little after shutting off. The need to work on price and technology a bit, but great potential.