What a dreamy politician! Oh…My…God!

The first time I ever heard of Congressman Aaron Schock, I was hanging out with some friends during a girls' night in, and one of my friends yelled to me from the other room: “Meghan, there’s a congressman on TMZ.” To which I answered: “Twenty bucks he’s a Democrat.” Well, I was wrong. Schock is not only a Republican, but currently fills the congressional district in Illinois that Abraham Lincoln once held. (This winter, Huffington Post readers elected him “Hottest Freshman,” garnering him an appearance on the Today show. A couple of weeks later, TMZ started stalking Schock.) In the era of President Obama pop-culture mania, how is one conservative young congressman becoming the Republican Party’s very own pop-culture politician—and someone even my most liberal friends in West Hollywood are asking me about?

And blah, blah, blah the post goes on. Assuming Schock swings that way, I'm thinking he can score this weekend, maybe at one of the many McCain homes!

Oh, and I had never seen this picture of Schock. I wonder if those boobs are on his staff now. 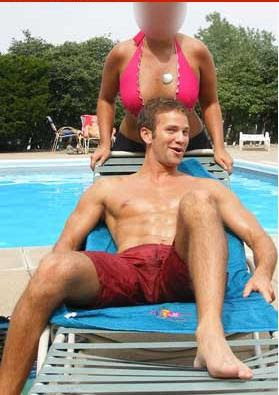 As a McCain supporter it's fun to see Meagan McCain show that same spark that her father has in a new and fresh way.