Stipulated: Pete Roskam is a Scumbag

Rep. Pete Roskam (R-IL) paid tribute to the NRCC, which he credited with helping him beat Tammy Duckworth, a Democrat and Iraq war veteran who lost both her legs in combat. He recounted how the media loved to tell Duckworth's personal story. "Even Al Jazeera came in and covered the candidate debate," he said. "I'm not making it up."

But he said "a funny thing happened." "The good guys have come over the hilltop for me," he added. "You know who came in and rescued me? You did."

This is the guy who accused Duckworth, a double-amputee, of "cutting and running" from Iraq during his 2006 campaign. And now he's making allusions to a military-style rescue saving his campaign? And what is he implying with the reference to Al Jazeera? That the so-called "terrorist network" is a Duckworth sympathizer and somehow in league with the director of the Illinois Department of Veterans Affairs and nominee for the Assistant Secretary of Veterans Affairs?

Of course it goes without saying that Roskam never served a day in his life. What an ass. 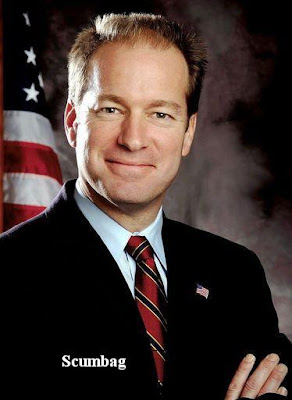 What huge fucking scumbag. Our modern GOP: bigots, cowards and liars.
Posted by Dave at 7:22 AM