The Glory of War

This morning I read this NYT obit of Illinoisan Russell Dunham and his heroic deeds in World War II.

On the afternoon of Jan. 8, 1945, Sergeant Dunham was leading a platoon in the 30th Infantry, Third Infantry Division, when the soldiers, among them his brother Ralph, were pinned down by German fire. They were at the bottom of a hill near the village of Kaysersberg, the birthplace of the Nobel Peace Prize winner Dr. Albert Schweitzer.

German machine-gunners and riflemen fired down on the Americans while an artillery barrage landed behind them. “The only way to go was up,” Mr. Dunham told Reader’s Digest long afterward.

Wearing as camouflage a white robe made from a mattress cover, Sergeant Dunham ran up the hill ahead of his platoon and charged a machine-gun emplacement. He was shot in the back, and his camouflage became useless: his white clothing was soaked with blood.

Despite “excruciating pain” from his wound, as the Medal of Honor citation told it, Sergeant Dunham wiped out three machine-gun nests and attacked German riflemen in foxholes. Moments later, Ralph Dunham destroyed a fourth machine-gun position.

Two weeks later, his battalion was surrounded by German tanks at the French town of Holtzwihr. Most of the men were forced to surrender, but as Mr. Dunham told it to Peter Collier in his book “Medal of Honor,” he hid in a sauerkraut barrel outside a barn.

He was discovered by two German soldiers the next morning, but while searching him they found a pack of cigarettes in his pocket and began to fight over it. They never noticed a pistol in a shoulder holster under Sergeant Dunham’s arm.

While the Germans were taking him toward their lines, one of them stopped at a bar. Sergeant Dunham shot and killed the other soldier. He escaped on foot, was spotted a couple of days later by United States Army engineers building a bridge, and was treated for severely frozen feet. 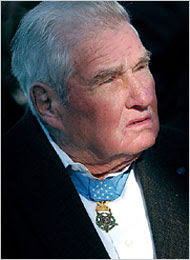 Not long before the war ended, Dunham was deservedly awarded the Medal of Honor.

War stories like this grab our interest (I've been thinking about the sauerkraut barrel since I read about it morning). But the very sad fact of war is that for every tale like this, there are hundreds in which our hero was sitting, standing, ducking, running or sleeping and suddenly his (or her) head is blown off. End of story. And I'm sure Dunham would have been the first to agree with and appreciate that.
Posted by Dave at 9:13 PM