Wearing Jeans is Immoral and Ruining this Country

Ha, when he’s not lying about global warming, George Will is denouncing the evils of blue jeans:

On any American street, or in any airport or mall, you see the same sad tableau: A 10-year-old boy is walking with his father, whose development was evidently arrested when he was that age, judging by his clothes. Father and son are dressed identically -- running shoes, T-shirts. And jeans, always jeans. If mother is there, she, too, is draped in denim.

Writer Daniel Akst has noticed and has had a constructive conniption. He should be given the Presidential Medal of Freedom. He has earned it by identifying an obnoxious misuse of freedom. Writing in the Wall Street Journal, he has denounced denim, summoning Americans to soul-searching and repentance about the plague of that ubiquitous fabric, which is symptomatic of deep disorders in the national psyche.

…
Denim is the carefully calculated costume of people eager to communicate indifference to appearances. But the appearances that people choose to present in public are cues from which we make inferences about their maturity and respect for those to whom they are presenting themselves.

Do not blame Levi Strauss for the misuse of Levi's. When the Gold Rush began, Strauss moved to San Francisco planning to sell strong fabric for the 49ers' tents and wagon covers. Eventually, however, he made tough pants, reinforced by copper rivets, for the tough men who knelt on the muddy, stony banks of Northern California creeks, panning for gold. Today it is silly for Americans whose closest approximation of physical labor consists of loading their bags of clubs into golf carts to go around in public dressed for driving steers up the Chisholm Trail to the railhead in
Abilene.

This is not complicated. For men, sartorial good taste can be reduced to one rule: If Fred Astaire would not have worn it, don't wear it. For women, substitute Grace Kelly. 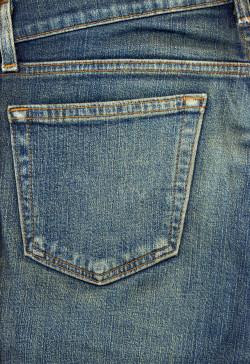 And that’s just part of his anti-denim, “get off my lawn!” screed; the rest is just as good. He ends with an admission that he was once FORCED to wear a pair of jeans and HATED IT. I’m sorry, but what a priss.
Posted by Dave at 7:12 AM

If you can't wear it to church, to a funeral, or to a wedding, then you probably should wear it very sparingly, if at all. I beg of you, do not wear it to any of the above events. It shows that you have a total disrespect for where you are and what you think of the purpose of the event. Jeans may be great for riding horses or cleaning out the stall but that's about it.