The Mexicans Want to Kill Your Kids

I’m sure you’ve heard about all the drug cartel violence in Mexico that has spilled over into U.S., border towns right? Well, apparently that’s just bullshit:

After weeks of hearing the war drums beat louder and louder, Sito Negron, editor of El Paso’s online daily news journal, Newspaper Tree, recently decided he’d had enough. An insurgency on both sides? he thought, listening to Clarke’s prime-time pronouncement. Are you kidding me?

According to the FBI, more than 1,600 people were killed by cartel violence in Juarez [Mexico] in 2008. El Paso, a city of 755,000, recorded just 18 murders last year. Laredo had 11; Brownsville and McAllen had three and nine, respectively. By comparison, Washington, D.C., with a population smaller than El Paso’s, had 186 homicides in 2008.

A native El Pasoan, Negron was fed up with national media feeding the frenzy to militarize his hometown. He published an opinion piece on Newspaper Tree titled, “Who are you idiots, and why are you on national television talking about the border? An open letter to U.S. media"… 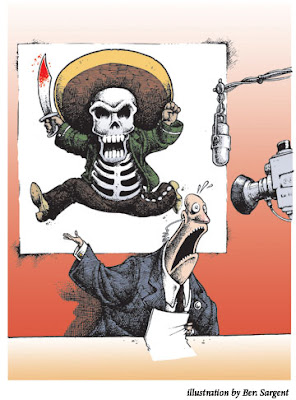 El Paso and Juarez are right across the border from each other. There doesn’t seem to be much spillage despite the media hype. I remember seeing on a cable news channel a few weeks ago an interview with the mayor (or something) of one of the U. S. border towns. He kept denying there was any significant “spill over” of violence but the interviewer kept treating him like he was just trying to spin the situation to reflect more favorably on his community. It was strange to watch, and not knowing much about the situation, I wasn’t sure who to believe. I mean, the guy seemed really sincere, not just trying to put the best face on a bad situation, but the interviewer simply didn't want to hear it.

Now, having said all that, there’s no denying the horrific amount of violence actually going on in Mexico and the situation certainly warrants watching so that it somehow doesn’t “spill over”. But let’s not get ahead of ourselves. And let’s be mindful that fueling this violence are the guns, demand for drugs, stupid drug laws and money all from the U.S. So while the blood may not be spilled on our side of the border, it’s not like we aren’t involved.
Posted by Dave at 7:06 AM

This reinforces my opinion that watching the national TV news not only doesn't keep you informed, but gives people a distorted view of reality. Life is better when you turn them off.

If we want to reduce violence spilling over from Mexico then we should scrap NAFTA and replace it with a trade agreement that will actually raise the standard of living there instead of lowering it.