Did I miss this in the local press when it happened?

…in one case [Megan Fulara, a community outreach liaison from the Illinois Attorney General's office] described involving a young Springfield girl who developed an online friendship.

"For seven months, she was chatting with someone, and he never said anything inappropriate," she said.

Eventually the friend, who was in fact a grown man, asked for a picture of the girl, who forwarded one from her yearbook. The man then re-sent a doctored photo featuring the girl's head atop a naked woman's body and proceeded to blackmail her with the photo.

"He extorted over 156 naked pictures of this girl," she said.

That offender was caught, but Fulara said that is not always the case.

Fulara was giving a presentation on online predators to a group in Carbondale. I just remember this being in the news here. Maybe I missed it or just forgot about it. 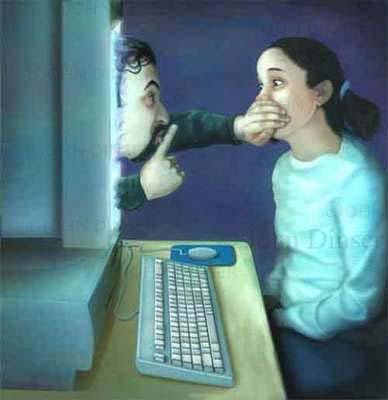 I think the whole “online predator” thing is a bit overblown to begin with (not that it doesn’t EVER happen) and even in this scary story, the child was not actually ever touched. Obviously, the “friend” was a creep and deserved to be punished but even a minimal amount of parental supervision would have stopped this quickly. Which, I guess, may have been Fulara’s point.
Posted by Dave at 11:52 AM