This being the last Friday before Abraham Lincoln’s birthday I thought I’d tie today’s beer blogging in with the birth of Springfield’s favorite (and most profitable!) son.

Oh, I’m sure while living here Abe spent many a Saturday night sampling the selection over at Brewhaus and then wrapping up the night trolling for chicks at Chantilly Lace, but what’s out there to hang an Abe/beer blog post on now? Where was I to get material? I did what Abe would do (WWAD), I Googled.

Here’s some of what I found. 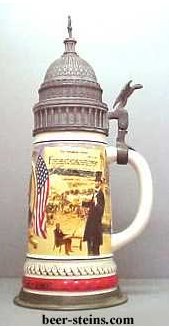 Very smart with the capitol dome lid and all. Apparently this stein was one of three in Anheuser-Busch’s commemorative Civil War series of steins. (The other two steins featured Robert E. Lee and Ulysses S. Grant).

Next up, we have a Lincoln beer quote. Yes, Lincoln spoke of beer, we think, on at least one occasion. Here’s the story from Carolyn Smagalski, noted Lincoln beer scholar:

Question: "Beer Fox, I am wondering if you can authenticate the Lincoln quote that ends in “the facts…and beer”. I have seen it posted both with the “and beer” and without. Hope you can help?" J.H., New York, New York, USA

Answer: You are asking about the famous quote, "I am a firm believer in the people. If given the truth they can be depended upon to meet any national crisis. The great point is to bring them the real facts...and beer."

I, too, have seen this quote with and without "and beer"- depending upon whether it is used in the serious context of a legislator's persuasive argument, or as a Lincoln anecdote. The fact that Lincoln was known for his skills at unrehearsed humor, storytelling, and anecdotes that strongly illustrated his point, convinces me that the quote did, indeed, end with "and beer." Although I cannot tell you the exact source of the quote, there are several books written on the humor of Abraham Lincoln, and you may have better luck than I in searching out the details. One is Lincoln's Yarns and Stories by Colonel Alexander K.McClure, who personally knew Lincoln. This is available at World Wide School.

I have not found the quote in this volume - however, this book clearly illustrates that Lincoln's speech was often peppered with a humorous quip at the trailing end of a serious sentence - this allowed him to often "get away with" giving an opposing point of view without causing offense. His point being made, he knew (as do experienced lawyers) that a sentence made, whether in jest or in earnest, sits in the thoughts of the listener.

Clearly more study needs to be done in the area of Lincoln and beer. It seems to me in my tour of the Abraham Lincoln Presidential Library and Museum I saw exactly zero beer containers, references to beer or 1860s style beer ads. Sad.

Finally I uncovered a picture of a long defunct beer out of Wisconsin called Lincoln Lager Maybe the beer was discontinued because it sounded too much like Lincoln Logs. I don’t know.

Note to Springfield Chamber of Commerce: we could use a good microbrewery and I don’t think the Lincoln name is currently being used as a beer brand name. Abe Beer would be a good name too. Think about it. A guy (let’s say an easy mark tourist) bellies up to a local bar and say he wants a beer. “A beer” sounds a lot like “Abe Beer” so before Mr. Tourist can specify a brand, the bartender opens an “Abe Beer” for him. Once tourist guy sees the beer already open in front of him, he’ll likely forget about his first choice and go with our brew. Man, I should be in marketing.
Posted by Dave at 12:02 AM

I was thinking Italian beer in honor of the start of the winter Olympics. Kinda fun trying to wager on what your topic of the week will be! Hadn't occurred to me to honor our local pres!

Beer Hugs To YOU -