Americans can be frightened into almost anything (hence the reign of George W. Bush). But this is just stooopid:

FREEPORT - It's usually not that hard to find a parking spot at Meadow's Shopping Center [in Freeport, Illinois]- unless you have 62 tires and a 200,000-pound Co2 tank in tow. 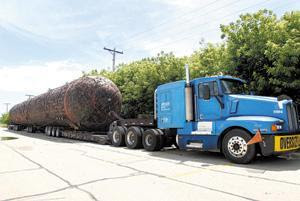 "This is what we do all the time," said Darryl Sharp, a foreman for the Missouri-based Specialized Hauling Company. "We haul these things from coast-to-coast, either way you go."
…

Sharp said the tank is empty and does not pose a threat...

"Most of the time they say 'can you get that damn thing out of here?' That's the way it is. Everybody's scared and everybody wants it out of their city," he said.

As an example, Sharp recalled an event as the crew drove through a small town in Arkansas three months after Sept. 11.

"All the sudden there was police officers everywhere around us, and we hadn't no sooner gotten out of our trucks, then they had guns pointed out.

America as Barney Fife. Sometimes I think the world should give us just one bullet.
Posted by Dave at 6:34 AM

Try being in Arkansas on 9/11. That was bizarre. After watching the news all morning and most of the afternoon, my then-girlfriend and I tried to make the most of that day of vacation. Traffic in Hot Springs was backed up to get into gouging gas stations, and even rock shops were "closed due to national emergency."

Regarding your first paragraph - Actually, Democrats and liberals also use exaggerated and sensationalist fears to justify bigger government, and the expansion of the welfare-warfare state. That's what they've been doing, with regard to many domestic and foreign policy issues.

But, as I pointed out a few years ago (wow - it's been that long?):
Sometimes, Republicans do it too.