I was just thinking: there should be an episode of Scrubs or an episode of House (or both!) in which Dr. Perry Cox (played by John C. McGinley)... 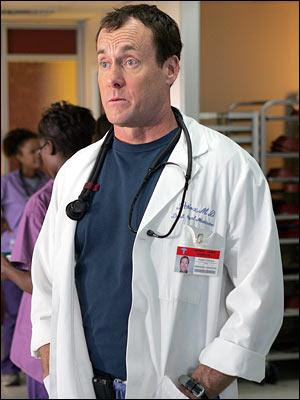 ...has to work with Dr. Gregory House (played by Hugh Laurie) 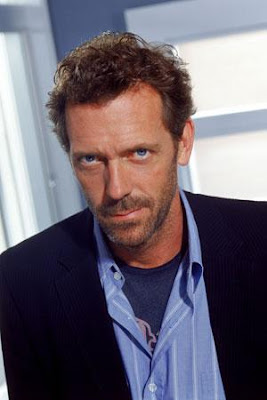 They are almost the same character except one is in a comedy and one is in a drama. They would certainly hate each other since they are both deeply jaded and cynical wise-crackers. I'd say even make them live together in their own series but their characters would never do that (they'd both be dead at each others hands in the first episode). But I could see them having to work together for an episode, even if the cynicism emanating from the screen might melt house plants in the room.

Thing is, I kind of relate to these guys. Sometimes I look at myself in the mirror and see House. Oh, not physically (although after a few days of not shaving a resemblance does start to emerge) but the middle-aged, and I hate to use the word again, cynicism and weariness of the human condition. I'm not as jaded, addicted, blunt or egotistical as House. Nor am I as talented in what I do. But still, there's a bit of House living in me. I would guess a lot of 40-somethings do.

The show (House) itself isn't one of my favorites because, frankly, the weird medical cases give me the willies (ditto E.R.). It's the force of the House character that keeps me watching it from time to time.

Anyway, I think it's time Dr. Cox meets Dr. House and let the clash of cynical (did it again!) witticisms begin. I know they're on different networks, but can't we make an exception for this deeply cynical (d'oh!) experiment?
Posted by Dave at 4:33 PM

I agree totally. I love them both. Would really be awesome if they both should up together!

even though im a young female, i find i have the same bitter cynic attitude as these guys. im even misanthropic. i think that draws me to them. i like doctor shows...but for some reason, when i watch house, its not so much for the doctor part of the show, but more for House himself....

This wouldn't work as Dr Cox talks about house in one episode of Scrubs proving that in Scrubs, House is just a TV series. If they were to meet it would have to be the actor playing House meets Dr Cox. Soz but it can't happen

Pretty effective material, much thanks for your article.