I know, this is kind of geeky but I got a kick out of it. My daughter is in New York City this week as part of school trip. I went out looking for web cams in NYC and found one in Times Square. She told me she was going to Times Square this afternoon so I immediately asked her to go to the intersection of 46th Street and Broadway and wave to me. Well, she called late this afternoon to say she was in place and I went to the Times Square cam. And there she was (circled)... 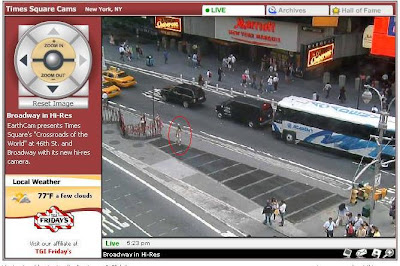 It was kind of cool. I would say go here and on my screen she would go there, all from my desk at work. I think some of my coworkers might have thought I was having cyber-sex or something hearing only one end of the conversation. Things like this might have seemed strange:

"What are you wearing?"

"Can you move over a little?"

"Are you there yet?"

"Are you having fun?"

Anyway, like I said, it was kind of a cool in a dorky dad sort of way. I appreciated her wasting valuable New York time indulging me.
Posted by Dave at 10:24 PM

That is very, very cool.