I think someone else around these blogparts spotted this once before but I can't remember who. Or maybe not; I'm too old to remember things.

Anyway, if you Google Image "Springfield, IL" the very first picture you get is this one: 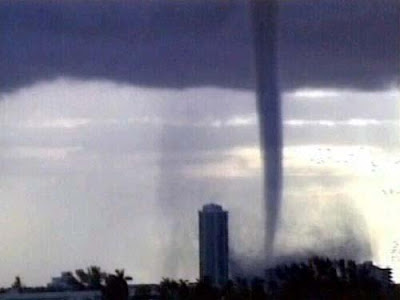 It is contained in a blog post (scroll way down to Monday, March 27 2006) from Mark Gallagher's Blog. He describes the photo as "Amazing photo of the tornado that hit Springfield, Illinois on March 12, 2006". He also says he used to live here in the 1980s.

But does anyone else see a problem or two or three with this photo? For example, I see at least one palm tree. Notice too, that building doesn't look like anything in Sangamon County much less Jerome. And the tornado here struck after dark and this picture is clearly showing daylight.

Not to pick on Mark Gallagher (he has some very nice shots on his blog) but that ain't the Springpatch I know. In fact, I think I remember the picture as that of a tornado in Florida. Just a case of mistaken identity I guess (I assume he got it from some other source that got it wrong, maybe even some idiot living here).

No harm I guess, except I hate to see the very first Springfield Google Image to be of something other than Springfield.

Update: Per gotshoo in comments, the above photo was circulated in an e-mail as being Springfield. That's surely where Mark Gallagher got it. Gotshoo busted the bogus pic in this post and Dave Heinzel posted this picture showing the REAL Springfield tornado scene: 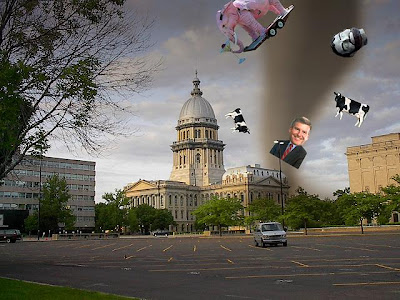 You're right. The local Springfield blogger community pointed this out right away..

And Dave Heinzel even found the "real" Springfield Tornado picture.

Yes that was debunked immediately, but more importantly - and to the point - now Dave's the11thhour will rank higher on a Google search for exactly what he's ranking on.

Good work you sidling you.

"...now Dave's the11thhour will rank higher on a Google search for exactly what he's ranking on"

No, Google Images doesn't pick up on my images that are stored strictly on Blogger. The pictures I have on Photobucket show up but I haven't used it in many moons. If I want ed to puff up my hits, I would go back to PB becuase I still get a ton of hits on the old stuff I have there.

I understand. I get in excess of 60K views on my photos per month via PB.

I was just goofin anyway.