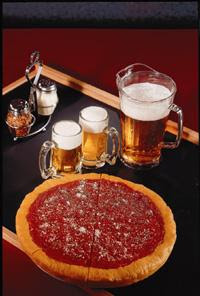 Check this out: a guy in Chicago has married the longest unbetrothed couple in history: Pizza and Beer. He's some of the Chicago Tribune's take:

Then he tried a small Oregon brewery's dark, rich stout and everything changed. He realized beer could be art. 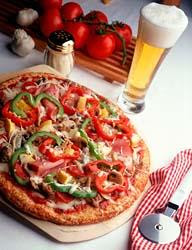 The real estate broker and father of two turned part of his garage into a brewery -- he added a refrigerator, brewing equipment and hung beer cans from the ceiling -- and went to work. He crafted porters. He crafted pale ales.

And last fall, he came up with something he swears will revolutionize the world's favorite 5 p.m. drink: pizza beer.

While there are no pizza chunks in the reddish-brown ale (the biggest misconception Seefurth fights), the brew does include ingredients and an aroma generally associated with marinara sauce: tomatoes, garlic, basil and oregano.

Not interested the liberal media's leftest slant, then go here to get it straight from Tom Seefurth himself.

"Pizza Beer" was developed Labor Day, 2006 by Tom and Athena Seefurth in our home brewery in Campton Township, IL. It all started with a surplus of tomatoes, a bag of garlic & an idea that started early in the spring when we planted our garden herbs.

The goal was to create a beer that would pair with a wide variety of foods, especially our favorite, Pizza! In the end, we were pleasantly surprised that this "mess" turned out to be the best thing since the guy with chocolate that bumped into Ralph Mouth & mixed up the chocolate with the peanut butter! Indeed, the world will love "Pizza Beer". 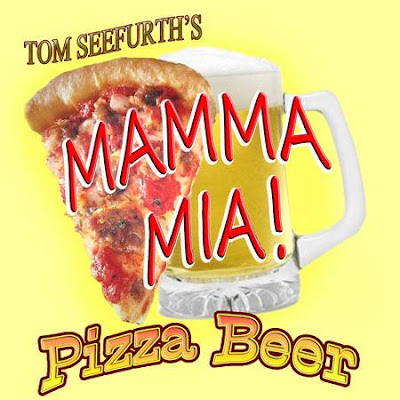 "Pizza Beer" IS A DEBRIS FREE product. The Margarita pizza is put into the mash & steeped like a tea bag. A whole wheat crust made with water, flour & yeast is topped with tomato, oregano, basil & garlic. The essence of the pizza spices is washed off with hot water and filtered into a brewpot, where it is boiled for a long, long time. During the process, we add hops & spices in a cheesecloth type bag & filter the cooled liquid into a fermentation vessel. (big glass 6 gallon water jug). After a week or two, the beer is good to go. Keg it or bottle it.