teh
Who’s more hapless, the guy on the left or the team on the right? 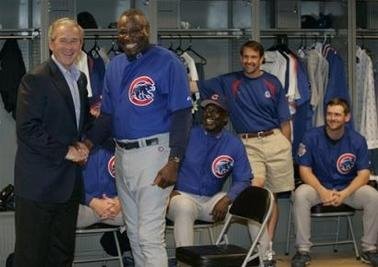 I don’t believe I just allowed a shot at my team to get in one at Bush. Oh hell, it was worth it.

Actually, the story behind this photo is kinda funny:

[Bush] greeted Cubs manager Dusty Baker with a handshake. “This is the year, right?” Bush said, in what some in the pool thought as sarcasm directed at the team’s perennial pennant futility.

“Dusty Baker, good to know you,” POTUS continued, turning to the cameras. He held the grip and grinned as the cameras snapped away. “Smile,” POTUS encouraged, and Baker complied, saying: “I’ll do what I got to do.”

A similar photo was posted at Deadspin, under the headline, You're doing a heck of a job, Dusty.

Thanks for the link, BTW.