...
Last Friday night I was out doing field research on beer in its natural habitat once again. Actually, it was the annual Christmas reunion at Brewhaus with Former Wingman SK & Friends. This year we sampled something called Dead Guy Ale. 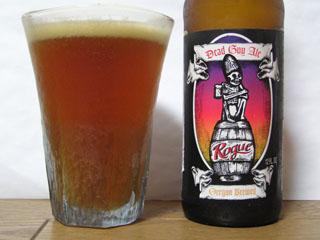 Dead Guy is brewed by the Rogue Brewery out of Newport, Oregon. They describe Dead Guy thusly:

Gratefully dedicated to the Rogue in each of us. In the early 1990s Dead Guy Ale was created as a private tap sticker to celebrate the Mayan Day of the Dead (November 1st, All Souls Day) for Casa U Betcha in Portland, Oregon. The Dead Guy design proved popular and was incorporated into a bottled product a few years later with Maierbock as the elixir. Strangely, the association with the Grateful Dead is pure coincidence.

Dead Guy is a German-style Maibock made with Rogue's proprietary "PacMan" ale yeast. It is deep honey in color with a malty aroma, rich hearty flavor and a well balanced finish. Dead Guy is created from Northwest Harrington, Klages, Maier Munich and Carastan malts, along with Perle and Saaz Hops. Dead Guy Ale is available in 22-ounce bottles, 12-ounce 6-pack, and on draft. 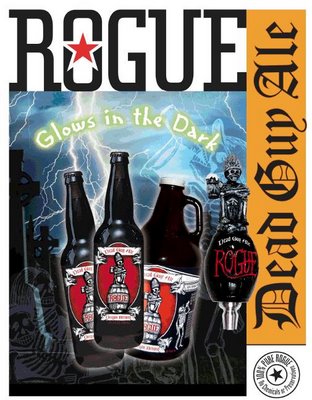 Former Wingman SK & Friends and I enjoyed the 22-ounce bottles. Too many of those WILL kick your ass. Fortunately, before we had too much, we moved on to other beers (that subsequently DID kick our asses). It was also fortunate we remembered to pack a designated driver. 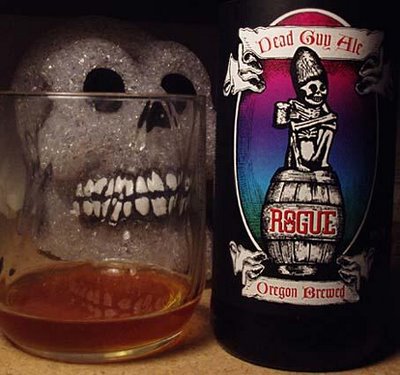 Anyway, even though I’m not much of an ale guy, I have to recommend Dead Guy Ale.
Posted by Dave at 12:01 AM