...
This story speaks for itself: 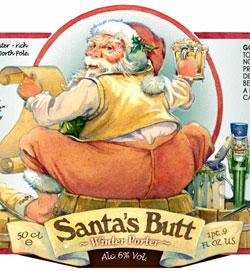 PORTLAND, Maine (AP) -- A beer distributor says Maine is being a Scrooge by barring it from selling a beer with a label depicting Santa Claus enjoying a pint of brew.

In a complaint filed in federal court, Shelton Brothers accuses the Maine Bureau of Liquor Enforcement of censorship for denying applications for labels for Santa's Butt Winter Porter and two other beers it wants to sell in Maine.

The dispute recalls a similar squabble last year when Connecticut told Shelton Brothers it had problems with its Seriously Bad Elf ale.

"Last year it was elves. This year it's Santa. Maybe next year it'll be reindeer," said Daniel Shelton, owner of the company in Belchertown, Massachusetts.

But the state says it's within its rights. The label with Santa might appeal to children, said Maine State Police Lt. Patrick Fleming. The other two labels are considered inappropriate because they show bare-breasted women.

The Shelton Brothers site is here if you care to research this further.
Posted by Dave at 6:24 AM

What I would give to be able to buy a beer called santa's butt here in Australia, but it would be an odd conflict here. While I don't think any government department would attempt to ban such an amusing name, I doubt anyone would be brave enough to try it on our unsuspecting beer-swilling public.

And are you seriously trying to tell me that there is a brewery over there operating out of a place called BELCHERTOWN???

Now that's as funny as drinking out of santa's butt.