Michael C. Finton, aka "Talib Islam", seems like the type who might have been an able foot soldier in a plot organized by non-morons. But left to his own devices his lack of operational secrecy somewhat undermined his endeavors.

According to the FBI release, after the Bureau learned of Finton's apparent interest in becoming a jihadi, the Bureau learned he was on parole and contacted his parole officer to find a parole violation that would allow them to search his home.

Agents found what seems to have amounted to a small literary shrine to John Walker Lindh. And then after Finton was released from jail, in a January 2008 interview with the FBI, Finton explained that he idolized Lindh. Faced with this evidence that Finton not only had an interest in becoming a terrorist but was also an easy mark, agents preceded to draw him into his own private terrorist plot that led this week to his arrest.
…
It makes perfect sense for the FBI to look for and try to roll up people looking to blow up buildings in the US. But these anti-terrorism cases are certainly more comforting when the would-be terrorists turn out to have been in league -- pretty much from the word go -- with government informants rather [than] actual operatives the government has never heard of. 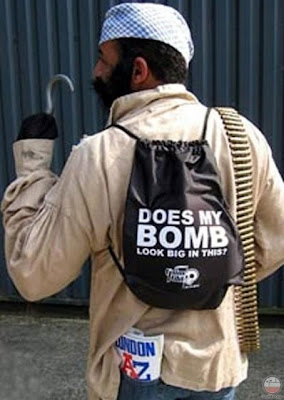 My point exactly, we are making even more terrorist. It's interesting how they had the busts in Illinois and Texas, after naked and bound census worker was found hung.

Look over here! guys with arab names are the threat!

Did you see the connection between Finton and Khalid Yasin?

Wow, Finton, is a fan of Yasin, next thing you'll find out is that he's a Cub's Fan. Did those 2 ever exchange bomb plans? He also wrote a letter to John Walker Lindh, butt never sent it.

The guy talked alot of crap about going overseas to get Jihad training, etc. But it wasn't till somebody gave him a van of (taxpayer funded fake) explosives did he actually do anything. Are there any real terrorists in Decatur that could have provided with what he needed?

I don't like the guy, I don't like stupid people at all. He should go to jail, but I am not threatened by this "terrorist". As a matter of full disclosure, I have a friend that works in the courthouse.