While eating my lunch in front of the TV most workdays, I tend to flip around the various news channels trying to pick up on something that’s really news. But if it’s a car chase, celebrity gossip, pundit shout-fest kind of day, I often wind up watching the speechifying on C-SPAN or C-SPAN2. And every so often I come across our own Dick Durbin making his case before the Senate. I like Dick Durban and am usually interested in what he has to say, but he does something that bothers me: He looks directly into the Senate C-SPAN camera rather than directing his gaze toward the Senate floor. I know, there probably isn’t even anyone in the chamber while he’s talking but still, give me the illusion. I want to feel like I’m looking in on the proceedings not being addressed directly. I really don’t notice other senators doing this. Maybe they do, I just haven’t seen it. 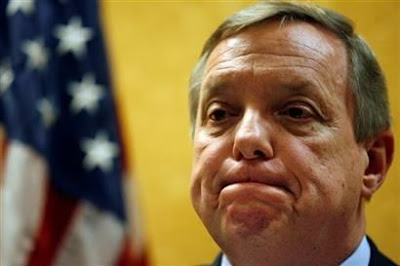