Bring on the Swedish Beer Team.

Did you know the Swedish word for “blue” is “bla”? And that’s what the Swedish brewers at Pripps call their beer: Bla. Funny thing is, the first time I ever tried beer as a much too youthful a youth, that’s exactly what I said: BLA! Beer is an acquired taste after all. 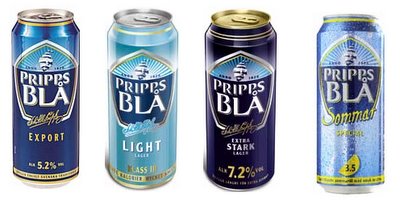 Pripps also has a whole page (no direct link) on how they make the Bla. One thing I’ve noticed over the last year visiting all these beer makers’ web sites is they love to tell you how they make the beer. I’m not sure most of us really care but they all think we do. I’ll just humor them so they keep making their brew but I’m really not that interested.

By the way, I had help in translating Swedish here.
Posted by Dave at 12:02 AM