I was playing around again with the excellent public records internet tool called Pretrieve.

This time I thought I would do a search for death records. But whose? Whose death am I specifically unaware of but surely must have occurred. (Sure, I cold have tried looking up someone who I know has died but what’s the point of that; I learn nothing.)

I settled on my former landlords from my days living in Freeport, Illinois in the 1980s. They were an older couple then, in their 80s. I figured it was a safe be that they had now passed on. But who knows, maybe not. I decided to find out. 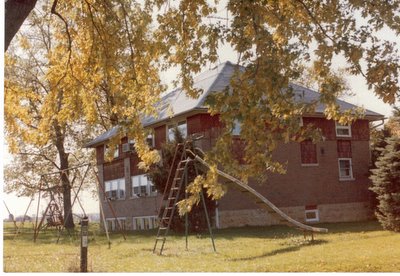 The schoolhouse apartments. Mine was on the second floor on the left.
My landlords were Hazel and Otto. Otto was a retired farmer who had taken an old schoolhouse, raised the roof and turned the building into four apartments and a place for them to live in the basement. Hazel was his wife. 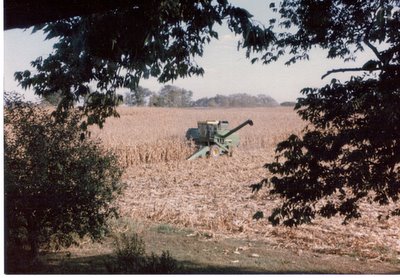 People think I'm kidding when I say I lived in the middle of a corn field. This pic was taken from my apartment window. The radio sation I worked at is beyond the treeline in the background.
Otto was a quiet man who kept to himself. I’m not sure he said more than 50 words to me in the 3 1/2 years I lived in his building. But he was healthy and still did the maintenance work around the apartments and tended a large garden in the summer (the farmer in him, no doubt). 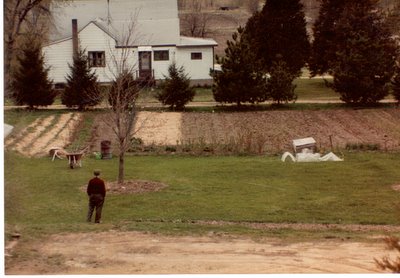 A reflective Otto looking over his garden. Photo taken from my apartment.
Hazel was vocal and engaging. She was very motherly to her tenants who were, I think by design, all single men (she once told me men were neater). Hazel made it her business to know what was going on in all our lives but not in a pushy/nosey way. It was more in a matronly way. Hazel once knitted me a pair of slippers that I had on so often I wore a hole in one of them. I still have those slippers although I don’t wear them anymore. I can’t throw them out. It was also Hazel who came up to my apartment on day and gave me a block of cheese. She told me the government was giving it away. She wound up with way too much of it and thought I could use it. This turned out to be some of the famous Reagan Cheese. Being a poorly paid radio newsman, I was grateful for the dozens of grilled cheese sandwiches I made out of it. 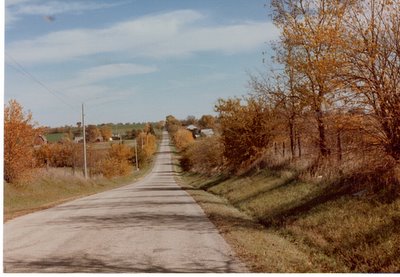 The schoolhouse sat in a nice little valley.
It can be seen here in the middle of the picture on the right side of the road.
Anyway, I did the search and on Pretrieve and found both Hazel and Otto. Otto died in 1993 at the age of 93. That was about six years after I moved out of the schoolhouse. Hazel made it past 100, passing on in 2001 at the ripe old age of 101. I’m sure she was talking until the end.

It's funny how people touch your life. I took Hazel and Otto for granted at the time. I was just beginning my adult life and they were in the last years of theirs. I didn’t think much about that at the time. I’m glad I knew them. I hate the term “closure” but seeing their death information did add a conclusion to their story in my mind. I would wonder about them from time to time. I’m sorry they're gone. 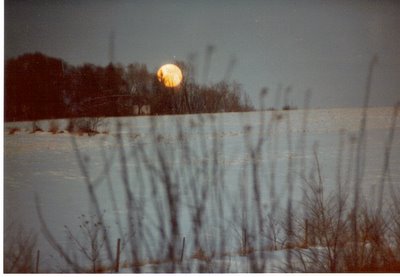 The moon rise in the winter of 1984 as seen from my schoolhouse apartment.
Posted by Dave at 11:43 PM

That's a nice little story, Mate. Good on ya!