This story on CNN.com via the AP caught my attention. A town in Ohio that had ben dry for 131 years finally lifts the ban on beer. The best part of the story was this photo: 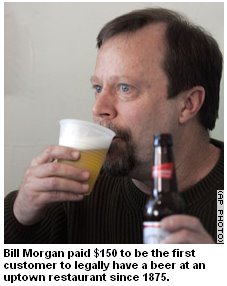 Man, that’s the expression I’d have too if it had been 131 years between beers. I'd probably be willing to pay that much too. I also like this bit from the article:

Westerville's temperance history dates back 131 years, when the town's saloon was blown up during what's known as the "Whiskey Wars."

The long historical arm of terrorism.
Posted by Dave at 2:19 PM