I hadn’t checked for a while on the status of the D-Day Museum in New Orleans so I went to their site tonight and found the museum will be reopening on December 3rd. (For those new to this blog, I had been to the museum just a few weeks before Katrina and have been following its fate.)

There was also this undated message that reads, in part:

The leadership and staff of The National D-Day Museum mourn the devastating losses suffered by our families, friends, and neighbors in the wake of Hurricane Katrina. We pledge ourselves to extend every effort to join with all who will heal and rebuild our community and our region. The very essence of our educational mission always has been to convey hope and human resolve. Today those values remain vital.

We know that education, culture, and tourism have crucial importance to the rebuilding of New Orleans. Therefore, we intend to reopen our Museum to the public as soon as it is safe and feasible to do so. We are relieved to report that the losses to our facility and collections were limited, but the restoration will require much work.

As we rebuild, we also reaffirm our commitment to continue and complete the expansion of our campus and its programs as planned. This effort, begun last year, will enlarge and enhance our Museum in keeping with its designation by the United States Congress as America’s National World War II Museum.

So it sounds like there was more damage than I originally guessed. Of course, I can’t tell from the message how much was storm damage and how much was looting. I still say that place isn’t exactly going to be a high priority for looters unless it’s a bunch of history geeks like me (and we’re too shy to loot anyway, or at least we would spend too much time looking at stuff and wind getting busted).

It's also good to see the expansion project is still on (see vision below). 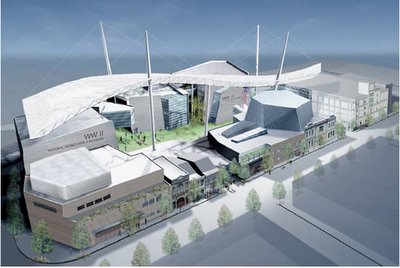 Given the museums location near the downtown business district I figured it would be up and running again soon. Besides New Orleans needs every tourist attraction it can get to facilitate the rebirth of that city.
Posted by Dave at 8:28 PM

I always wonder if they have any use for the Flag Armband passed down from my Grandfather who landed during Operation Torch. Of course, Torch is pretty much forgotten in the annals of the European conflict.