With “Scooter” Libby’s indictments in the news since last Friday, I got to wondering, what does a guy have to do for a beer when he finds himself liked up for a crime. Well, it turns out you just slip out, buy some brew and head back to your three hots and a cot.

First we have this story:

The Hawkins County Jail inmates, who bought four cases of beer before returning to the jail, were charged Monday with escape and introduction of intoxicants into a penal institution, the Kingsport Times-News newspaper reported Tuesday.

"I guess they thought if they came back they wouldn't be charged with escape, but they were wrong," Sheriff Warren Rimer said.

Two of the inmates walked out through a fire exit, left the door propped open with a small Bible and made a hole in the exercise yard fence. They walked to a nearby market and bought the beer.

The inmates did not raise alarm at the store because they were wearing street clothes borrowed from other prisoners. The crowded jail doesn't have enough orange jumpsuits for all of its inmates.

The sheriff pointed out that all 36 inmates on the cell block might have tried to escaped while the doors were unlocked.

"At least they came back," he said.

And then there’s this:

A Vermont man apparently left a prison work camp, bought beer and cigarettes and then returned to jail.

Authorities says that Mark Delude of South Barre crawled under the fence that surrounds the St. Johnsbury work camp, walked a mile and a half to the nearest convenience store, bought a 24-pack of beer and a carton of cigarettes and then returned.

Vermont State Police Lt. George Hacking, a 21-year veteran, said it was the first case of its kind he'd ever investigated. "I don't remember trying to catch people trying to break back in," Hacking said. "But nothing surprises me." 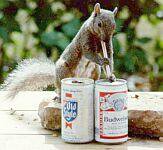