The Hedgeapple of My Eye

Marie says she thinks hedgeapples aren't found in Springfield these days as much as they used to be.

Hmmm...not to start a raging debate but my experience has been just the opposite. The neighborhood I grew up in on Springfield's south side was, I think, devoid of hedgeapples. However, the subdivision where I live now has several of the trees. 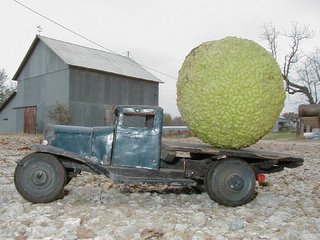 So unaccustomed to hedgeapples was I in my youth, it wasn't until my last year of college I even heard the term. In fact, that day of revelation has become legendary between my old college chum SG and me. We had a third roomate that year, Dan, who for some reason one day, mentions hedgeapples. SG and I looked at each other, then back at Dan, and professed our cluelessness as to what the hell he was talking about. Well, Dan loudly squeals, "YOU DON'T KNOW WHAT HEDGEAPPLES ARE?". He was literally squealing! His reaction was so funny, SG and I can't ever meet up without injecting that line in conversation at some point (that point is usually after a few beers but whatever). But since that day, I've also always been able to identify and maturely discuss the lowly hedgeapple.
Posted by Dave at 6:47 AM