I must say, I’m impressed that yet another friend of mine has started a blog. Local musician and composer Sam Crain has hit the blogosphere with Views and Reviews. Sam, a Springfield resident, is blogging under the moniker Roger Ulmer Roundly (Sam gives his real identity away on his blog so don’t worry, I’m not outing a fellow anon blogger). Knowing Sam, I’m sure there's a funny story or inside joke behind the name Roger Ulmer Roundly but I’m not privy to it at the moment.

I worked with, partied with and often commiserated with Sam for many years in the 1990s. Sam is a well-known local jazz guitarist and all-round good guy. I had often thought of blogging about him and his musical achievements, which are many, but never got around to it. So, apparently to rub my face in it, Sam started his own blog. Or something. 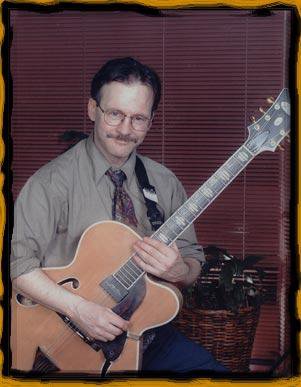 By the way, Sam has released a shit-pot full of CDs. He also plays with his band in various incarnations throughout the Springfield area.

Thanks Dave!
Actually the nom de plume is from an old Saturday Night Live skit with Dan Aykroyd playing "Fred Garvin, Male Prostitute"(his pimp of course was played by Garrett Morris, complete with the hat & other pimpaccessories). He says to his client(I guess with a male prostitute you'd call her a Jane),"I'm going to strike a few provocative poses and then proceed to roger you roundly". It's obviously a British phrase.
Yes, blogging is fun(and therapeutic too--at least I feel better..).later,
Sam