Ted Koppel's last Nightline is starting. It's a sad day. 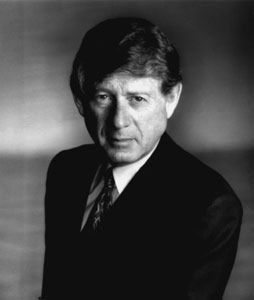 Update: Koppel finished his last Nightline broadcast with a warning: give the new guys a chance or expect ABC to pull the plug. I think this is right. Koppel, while he is the last of the old school (read: good, dedicated) broadcast journalists on television, leaves a program that still (usually) embodies broadcast journalism's potential. The post-local news real estate on ABC is valuable and assuming the “new guys”, whoever they are, run with it they will need an audience. Personally, I think nightline has always been bigger than Koppel. While very talented, Koppel was second to the shows concept and that means, in the right hands, it can go on.

When it was first announced Koppel would be leaving Nightline last spring, I had these coments:

Nightline is the best daily news show on television now. It has been for some time and compared to the unending crap on CNN/Fox/MSNBC, it's positively fantastic. No word on the fate of Nightline. I suspect it will disappear too unless ABC is unable to come up with anything to compete with Leno/Letterman (oh please, not Jimmy Kimmel, please, please, please).

I witnessed Nightline's birth as an outgrowth of the coverage of the Iranian hostage crisis and Soviet invasion of Afghanistan, both in late 1979. At first, it wasn't called Nightline, that didn't come until March of 1980. See, back in the 70's, with no cable news networks, the broadcast networks would provide extra coverage of big news events after the late local news, at 10:30 (not 10:35!) Central Time. They were generally called "Special Reports". With the Iranian and Afghanistan situations bringing nightly special reports for months on end, ABC decided to make it a regular news show.

Nightline has always been pretty straight-forward and unpretentious. Which means it really has no place in modern broadcasting.

I stand by that post but really, really hope that Nightline lives on.
Posted by Dave at 11:04 PM

Isn't WICS already running Entertainment Tonight before it runs Nightline? I guess that says a lot about their priorities and values.