Oh, I could have had a Tomato Bibere! (Slapping my forehead)

Good news kids: the Japanese are now making a tomato beer. Hear that Brewhaus? I expect you to have one chilled for me on the occasion of my next field trip. 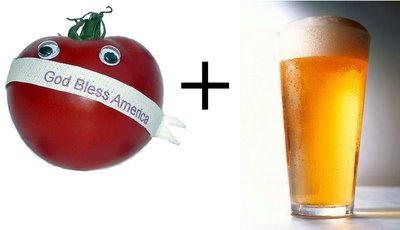 Sorry, I couldn't find a picture of tomato beer anywhere. This is the best I could do.
Anyway, I saw this breaking news on the most excellent beer site Realbeer.com:

Tomato Bibere combines the sweet flavor of a tomato with the bitter taste of hops. One tomato is used in the production of each 330ml bottle of reddish beer.

Isamu Waki, who runs an izakaya pub in Tokyo, has been asking other brewers to produce a tomato beer for years. Hirofumi Koda, president of Echigo Beer Co., was the first brewery operator to take him up on the idea.

Waki pinned his last hope on Echigo Beer, which has produced beer from rice, pears and even green tea. "I was overwhelmed by Waki's enthusiasm for the project, so I decided to go for it," said Koda, who himself does not care for tomatoes.

The master brewer aimed at making a healthy drink, so all of the ingredients are organic. Since tomatoes are fibrous and have a low-sugar content, filtration and fermentation were especially difficult. The first trial product, which took five months to make, was watery and barely tasted of tomatoes. Koda called it vile.

Koda and Waki tasted various trial versions of the beer by altering the amount of tomatoes and by increasing the sugar content to improve the beer they finally released.

Actually, on second thought, I think I’ll pass. I could use the lycopene, sure, but any tomato based drink is bound to kill my stomach. When you’ve got a spinach based beer drop me a line.
Posted by Dave at 12:02 AM