I don't spend much time in bars anymore but here's something I know, back in the day, would have been a great thing on those nights when I was particularly, ummm, thirsty. I'll let the BBC tell the story:

An intelligent beermat that alerts the bartender that your glass is empty could feature in pubs of the future.

Like an ordinary mat, it absorbs drips; but the gadget also has hidden sensors.

The device will detect the weight of the drink above it, working out how much is left before sending a signal to the bar for a refill. 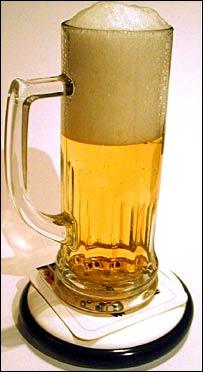 When drinks are low, a blinking light at the bar could let the waiter know to check that table for a top-up.

Because the mat can also sense being picked up and flapped around, customers can signal an order - with the urgency judged by the speed it is moved.

Another feature is that drinkers can say how many drinks they would like to order by stacking of a number of mats in one hand.

Ahh, the future of bars looks bright: Beer Mats and, coming soon (hopefully), no smoke!
Posted by Dave at 12:02 AM

I'm not sure how much of a need there is for this. Most beer drinkers that I know aren't demur about alerting the barkeep when their glass gets light. An interesting use of technology nonetheless.