FBB is not above letting others do its work. This week The Daily Show, the world’s greatest source for news and, well, news, reported recently on the miserable, dare I say wretched, state of beerness in the state of Alabama. Beers are so repressed in that state a resistance movement has sprung up to battle the forces of beer suppression.

It turns out Alabama has real limits on what beers can be sold in the state. For example, no beer can have an alcohol content over 6% and it can’t be sold in containers larger than 16 oz. Oh, the shame! I call these the Beer Crowe laws. Sadly, I hear its historical roots go back to the Civil War when Springfield's own Abraham Lincoln saw fit to free the slaves but cruelly left beer lovers to languish under the boot heel of Southern justice.

The resistance movement of which I speak operates under the name of Free the Hops and has a clandestine web site here.

One page on the site gives us a brutal glimpse of the harshness of beer life in Alabama. Below is a picture of beers that cannot be obtained anywhere in Alabama. They have, in effect, been exiled. Refugees in the beer wars. The picture isn’t pretty: 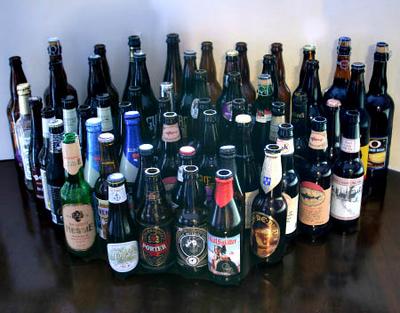 The caption on the Free the Hops web site reads:

Here's a sampling of beers that are currently illegal in Alabama. This list is not exhaustive, only illustrative.

Yes, look on the huddled, illustrative, forlorn beers with their empty souls…hey wait…its not just empty souls, many of the bottles themselves are empty of beer. It’s almost as if some one at Free the Hops gathered these beers for this photo and then drank them before taking the picture. Hmmmm.

But never mind that. The Free the Hops site is a virtual treasure trove for beer blogging. They even have a Beer Blog. Oh, I nearly swooned.

God love these brave freedom fighters. They are bringing freedom to the evildoers of the Axis of Sobriety. I suggest you support the “troops” by getting some Free the Hops gear like this shirt quoting Springfield's own beer apostle Homer Simpson: 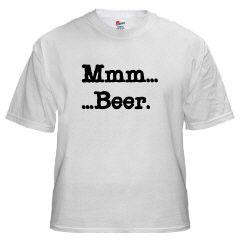 Don’t think you’ve heard the last of these Johnny Rebs on this site. Nope, I plan to support them here by lazily ripping off their site for my beer blogging gain.

Oh, and here’s the original Daily Show segment that so moved me to blog the name of Free the Hops.
Posted by Dave at 12:02 AM

I really appreciate this entry! Being that I am a beer-lover from this 'beerless' state, I feel that I am at a disadvantage because I have not been able to sample some of the greatest beers around, you know, outside of Alabama.