One of the few national Republicans not in legal hot water or jail in 2008 might be Rudy Giuliani. You know, the former mayor of New York that, by all media accounts, single-handedly saved the city and maybe the whole nation from total destruction on 9/11/2001. 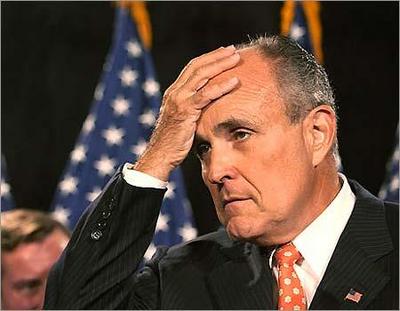 COPENHAGEN, Denmark (AP) -- Former New York City Mayor Rudolph Giuliani said Sunday he will contemplate next year whether to run for president in 2008.

"I will be considering it next year," Giuliani said during a visit to Denmark. But he added that playing with the idea of running for the Republican nomination for president did not mean he would actually do it.

"Sometime you warm up and get ready and you don't get in and pitch," he told reporters, in a baseball analogy.

Whew! After Jim Edgar finally told us all what we already knew -he wasn't going to run for Illinois governor- we needed someone new to string us and supporters along. I wonder if this will bring Rudy even more media attention. One would almost think he likes that sort of thing.
Posted by Dave at 9:28 PM