Carbondale Under Siege From Wildlife Again

teh
Animals continue to terrorize Carbondale and the locals are fighting back -hard. Now that the killer deer have been (for now) neutralized, a new offensive has been launched against emus. Yes, emus. You know those large flightless birds that look like ostriches. 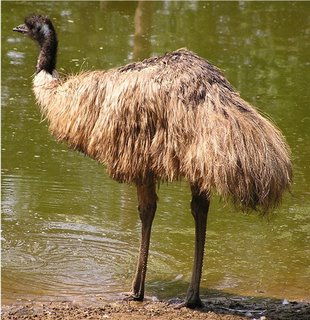 Details from The Southern Illinoisian:

CARBONDALE - When an emu in Carbondale failed to surrender to police Wednesday, officers were given no choice but to put the large bird down.

Sgt. Mike Osifcin said the Carbondale Police Department got its first emu call at 11:19 a.m. The bird was near the intersection of Charles and New Era roads.

At 12:09 p.m., another call came. This time, the mobile emu was on Oakland Street, near the cemetery.

Not amused indeed. Damn emus! Why don’ they go back to where they came from. Sure they come here to do work American birds won't but look how they act. Time to build a fence at the border with Australia! 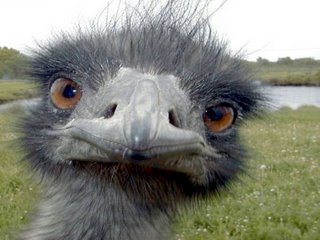 Osifcin said several animal control agencies and veterinarian offices were contacted in an effort to locate the emu's owner. No one seemed to know where the bird had come from or where it belonged.

One thing was clear, however. According to all animal experts contacted, emus can be dangerous. Vicious, in fact.

Yes, never fuck with an emu if you know what’s good for you. Especially if its drunk.

Their kick and sharp toenails, Osifcin was told, can cause serious damage to anyone who gets too close to a frightened or angry bird. There is really no way to capture the bird, he was told. It would be necessary to destroy it.

"They are bigger and stronger than you think," he said.

Osifcin said he shot the bird five times with a shotgun from about 12 feet away.

Another officer was called to the scene, armed with a rifle. Three rifle shots later, the bird was down.

Never fuck with a cop with a rifle. Especially if he’s drunk.

Osifcin said a considerable audience assembled from the neighborhood and nearby
construction crew. The emu kept running up and down a fence line on the Allyn Street property. Clearly, Osifcin said, the bird was familiar with a fence.

"I think he's going to be buried somewhere," he said, noting the city street crew removed the dead bird from the residential neighborhood.

Osifcin said there have not been reports of any damage caused by the bird. He said this is the first emu complaint he is aware of in recent city history.

Sure, in recent history but in the pioneer days emus roamed the streets of Carbondale at will, raping, stealing and spitting at terrified townsfolk. Especially when they were drunk.

No word on if the big bird will be buried in the cities old Emu Cemetery.

Best "animals attacking Carbondale" story ever. What in the hell is going on down there?

I recall having my drink cup expertly snatched from my hand while on a visit to the Henson-Robinson Zoo (Springfield, Illinois) several years ago - by an Emu.

I grabbed at the cup mid-air, managing to get hold of it, but the EMU was quicker, and with its powerful beak it ripped the cup from my clutch.

It then proceeded to devour the ice which it had coveted.

Never underestimate the Emu unless you want to lose a finger, or your nose.

This is Carbondale we're talking about. Of course the emu was drunk. Or on mushrooms, maybe.