teh
I’m finding the Fourth of July isn’t that good for beer blogging. Last year my post was kind of weak and this year I’m not doing much better. In fact, on this occasion I’m ripping off another site even worse than I usually do, but this is good stuff and I can’t pass it up. Beeractivist.com has this report called Fermenting the Revolution: The Beer Activist Guide to Saving the World.

Beer Is Patriotic
Going to the pub and drinking locally brewed beer is an act of patriotism. It follows in the best tradition of local self-reliance set out by America’s Founding Fathers. 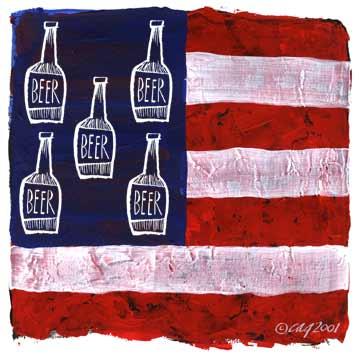 The Boston Beer Party
The American Revolution was inspired, at least in part, by the beer muse. The band of patriots lead by Samuel Adams and John Hancock to that fateful party on the port had conspired their sabotage over pints of ale at the Green Dragon Tavern on Union Street in Boston.

Similarly, it was in Buckman's Tavern that 40 Lexington Minute Men mustered on April 19, 1775 after Paul Revere alarmed them of approaching British soldiers, thus touching off the first battle of the Revolution.

Imported Beer - The Ultimate Patriotic Sacrifice
According to Princeton University’s WordNet, ‘Patriotism’ means “Love of one’s country and willingness to sacrifice for it.” Considering the importance of beer to the American colonists, it is all the more impressive that this bunch of beer drinking radicals should make the ultimate patriotic sacrifice and forsake imported English Ale. 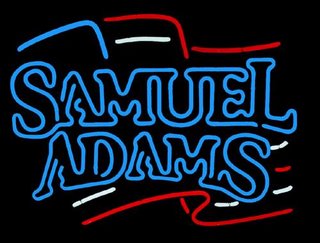 In the lead up to war, Samuel Adams encouraged his fellow patriots with a declaration:

It is hoped, that the Gentlemen of the Town will endeavor to bring our own OCTOBER BEER into Fashion again, by that most prevailing Motive, EXAMPLE, so that we may no longer be beholden to “Foreigners” for a “Credible Liquor,” which mayh (sic) be as successfully manufactured in this country. (quote excerpted from G. Smith, Beer in America, p 88-89)

Our Founding Fathers Who Art in Taverns
As any experienced conventioneer or capable business person knows, real work is never accomplished in meetings. No, the true deal makers shake hands over a drink in the bar, well after the official meetings have adjourned.

And so it was with the Founding Fathers. After the Revolution had been won, the patriots faced the daunting task of chartering a country. A defining aspect of their new Constitution, one of the most influential political documents of the modern era, was hammered out over an evening of beer drinking. It was on June 30, 1787, at Philadelphia’s Indian Queen tavern, that the Constitution’s framers agreed on a legislative structure consisting of a House and a Senate, thereby addressing a controversial issue of equal representation for small and large states within the union.

Thanks for posting my article about beer and patriotism. I actually just had a longer article on this topic published in American Brewer magazine (www.americanbrewer.com). More importantly, my full length book, titled Fermenting Revolution: How to Drink Beer and Save the World, is now orderable on Amazon.com.