...
You’ve probably heard of the ongoing battle between St’ Louis based Anheuser-Busch, which makes Budweiser, and the Czech brewery Budejovicky Budvar.

The two companies have been battling for a century over Budweiser and other trade names, such as Budvar. Currently, they are involved in some 40 lawsuits worldwide.

Budejovicky Budvar was founded in 1895 in Ceske Budejovice – called Budweis by the German-speaking people that populated the area at the time. Beer has been brewed there since 1265. 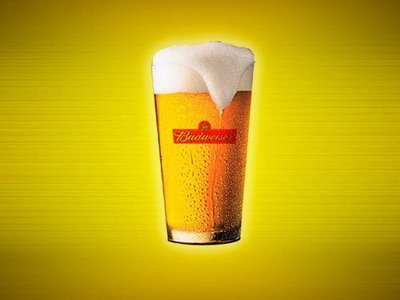 The founders of Anheuser-Busch used the name Budweiser for their product because it was well-known in their German homeland. A brewery in St. Louis began producing Budweiser, America's first national beer brand, in 1876.

Since 2001, Budvar has been exporting lager to the U.S. under the name Czechvar.

Well some good news: peace is in the air:

Jan 8, 2007 - After nearly a century of disagreements in certain parts of the world over rights to the Budweiser name for their beers, Anheuser-Busch and Czech brewer Budejovicky Budvar have formed a historic alliance in which Anheuser-Busch will become the U.S. importer of Czechvar Premium Czech Lager, the two brewers announced in a press release Monday. 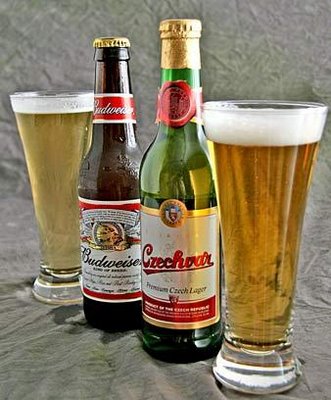 The agreement gives Czechvar, previously sold in 30 states by Distinguished Brands, access to A-B's wide-reaching U.S. distribution network. It gives Anheuser-Busch another European import in high-end beer category, part of a strategy that led to alliances with Grolsch, Tiger, Kirin and most recently InBev, which added Stella Artois, Beck's, Bass Pale Ale and other beers to its import portfolio.

Sadly, not all the news is good for Anheuser-Busch: 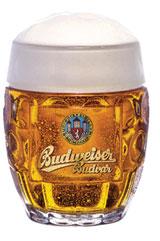 The U.S. brewery lost its fight against a 2001 decision by Portugal's Supreme Court, which ruled that Budejovicky Budvar had the right to use the brand name under a 1986 treaty between the Czech Republic and Portugal.

Why don’t these two companies just suit-up, get on the field and play a special Bud Bowl for the rights to world distribution of Bud?
Posted by Dave at 6:08 AM

I was in Ceske Budejovice in 1980, on the way back from a Thanksgiving trip to Prague. I quickly discovered that Budvar is a fine beer. So I had several.

Unlike Rich I've never consumed the stuff. There's lot's of good beer being made in Europe, and a lot of bad beer being brewed there too.

Most Americans assume it it's made in Europe, and it's been around five hundred years or so, that it must be a good beer - but lots of horrible beers still linger within Europe for a variety of reasons - including protection from their governments, local history, and local taste.

One thing which I've noticed over the years is that no matter how bad the beer, the more you drink of the stuff the better it seems to taste - just until you pass out.

Certainly Budvar couldn't be much worse than Budweiser - which goes down like a bubbly tea. Budweiser is a beer I'd never buy unless it was on sale, and I knew that someone I didn't like was coming over for a visit.

I'm a dark beer man, and I like a beer with some complexity.