Out on Facebook, I have joined a number of "groups" that are just meeting places for people who have common interests or histories. I jumped into a few obvious ones like the SIU Alumni Association and one called "I Survived Blessed Sacrament School". But by far, my favorite membership (or at least the one I take the most pride in) is in a group called "I Remember the Aloha". 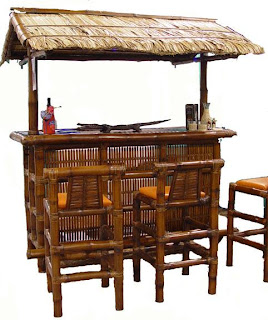 The Aloha, of course, was the 3:00 AM bar located on Sixth Street south of Stevenson Drive until it closed and was demolished forever ago.

The topic of the Aloha came up on Look Back Springfield a few years ago in the comments of this post. Here is a sample of some of those comments:

Dave said...
...
I'm talking about the Aloha on South Sixth St near, I think, where the McDonald's is now. It was about the size of a phone booth but, somehow held a hundred people after 1:00 AM. Decorated in Polynesian Tacky, it was the most fun place in town.

And what was that specialty drink they served? It was blue. Or I was drunk. Or both.

Anonymous said...
Dave you were drunk after drinking that Hurricane.
...Back to the Aloha topic, I met and went home with more women there than any other place in town. I kept telling Hilda that whatever she is giving the women to drink...keep doing it because it was working. LOL. You knew you had too much to drink when the sisters started to sing and you enjoyed it!!!!

For as many times as I went to the Aloha, I'm ashamed at the fact that I have just about zero recollection of the place.

And that highlights one problem with this Facebook group: It's name. I mean, no one really "remembers" the Aloha. At least, "remember" is too strong a word. Vaguely recalling snippets before you passed out or having foggy images of doing something after hours at a Springfield tiki bar maybe. But no one remembers the Aloha.

And by the way, if you get on Facebook and join the group, you'll be able to see several pictures of the Aloha posted along with a number of comments.
Posted by Dave at 10:52 PM

You knew you had too much to drink when the sisters started to sing and you enjoyed it!!!!