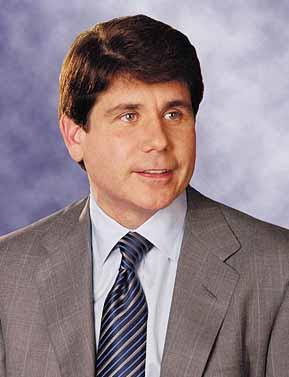 Update: So is this why Blago was taking so long to pick an Obama replacement? He had bigger things to worry about like getting is affairs in order?

Update II: So we are down one U.S. Senator and the Governor. Who's running this place?

Update III: Gee, Blago was just getting some national press on the whole Bank of America thing. Now he's going to get a whole lot more attention.

Update IV: Does Pat Quinn hate Springfield too? I'd sure hate for Springfieldians' inferiority complex and sense of victimhood not to be fed regularly. It's such a becoming trait.

Update VI: It's always good to get the bad guy, but I'm not as gleeful about this as a lot of people. I guess I just find it sad and disappointing.

Update VII: Not that I was paying a whole lot of attention, but I really thought that Blago would go the same way as George Ryan. That is, he would wind up serving out his term and then eventually face charges of some sort sometime after he had left office and after a lengthy investigation.

A 76-page FBI affidavit alleges that Blagojevich was intercepted on court-authorized wiretaps during the last month conspiring to sell or trade for personal gain the state's U.S. Senate seat, which is being vacated by President-elect Barack Obama.

Oh boy. You would think that knowing he was under the corruptuion microscope he would have laid off the, well, corruption.

Update IX: And no, I don’t think this is going to have any effect on Barack Obama. I never saw Obama and Blago as being all that close. I’m sure the McCain campaign would have tried to connect the two (see Rezko and Ayers) had this happened a few months ago, but I’m not sure it would have been all that damaging to Obama.

Update X: I sure am getting a good workout with my Roman numerals.

Update XI: You know, if Blago was living in the Governor’s Mansion where he belongs, he likely would have been arrested here in Springfield. All those federal agents would have eaten at our restaurants, slept in our hotels and maybe taken in the Lincoln sites. It would have been a boost for the local economy! But no, Blagojevich was at his home in Chicago. Even in his arrest, Blagojevich is just proving how much he hates Springfield.

Update XII: While many state Republicans seem extra-specially excited about today’s news, it’s really the Democrats who should be the most thrilled. Blago can be long gone before the 2010 election season really gets going. This actually removes the elephant sitting in their room. Since most Dems in recent years have had serious issues with Blagojevich, it’s hard for me to see how he drags the party down with him. But who knows.

Update XIII: The federal complaint is available for your enjoyment here (pdf).

Even setting aside the primordial level of corruption of trying to sell the senate seat of the President-elect of the United States, I never fail to be amazed at the brazenness and stupidity of some political crooks. I mean, I think everyone involved in politics or interested in political corruption in the country had to know that Blagojevich's phones were tapped and probably his offices were bugged, and that Pat Fitzgerald had him under the craziest level of scrutiny. And he tries to sell the senate seat with that hanging over his head? That's simply amazing.

Update XVI: Oh, adding to Update XI above, don’t forget all the media members that would have spent money here and all the free publicity Springfield would have gotten. Oh, that man’s contempt for us is just so palpable. How could he deny us this moment?

Update XVII: Wow. Kelm and Kirk really are two of the stupidest people on the planet (well, that maybe a little harsh; maybe just knuckleheads.). But they are very happy cuz today’s news proves Democrats are all bad. Click. I’ll wait until later to get live local radio coverage.

Update XVIII: The AP has the best “mood” photo of Blagojevich that I’ve seen so far today. 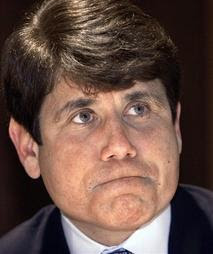 Why the frowny face, Rod?

Update XIX: A lot of people are saying they knew this was coming sooner rather than later. I’ll admit that I did not, at least not in the near future. But even for those who did allegedly know, wasn’t this morning’s news a bit jarring and, well, unexpected in the sense that it happened so suddenly? I would have thought there would have been more leaks leading up to the arrest. And maybe the governor given time to surrender himself after an indictment was handed down. Maybe there were lots of obvious telltale signs (not counting wishes) and I just wasn't paying attention.

Update XX: OK, in the Fitzgerald press conference it is made clear that the criminal complaints came now, in part, to prevent the corruption of the process by which Obama's senate seat is filled. This will hopefully circumvent any "tainted" senator going to Washington. So I guess I was right, this was sudden and for good reason. This is like the cops foiling a bank robbery. No need to wait. Although Blago, as of now, still has the power to appoint the new senator, no one in their right mind would accept such an appointment from Blagojevich becuse it would lack legitimacy.

I'm runing out of Roman numerals so more Blago Bust thread in post above
Posted by Dave at 8:16 AM