Take a Look Under LaHood

Rep. Ray LaHood (R-Ill.) is in discussions with the Obama administration to take a Cabinet-level post — most likely secretary of the Department of Transportation, according to knowledgeable GOP sources.

When reached on his cell phone, LaHood said only that Rep. Rahm Emanuel (D-Ill.), President-elect Obama’s incoming chief of staff, had contacted him last night

He would not discuss the details of the conversation.

“It’s probably not a good idea to discuss this at this moment,” LaHood said.

But one GOP source said that LaHood was engaged in talks with Emanuel about the Transportation secretary position, and the Obama transition team would like to make an announcement about it on Friday. 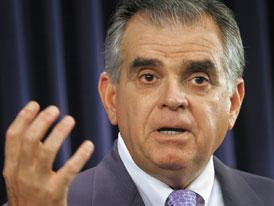 I guess I’m not sure what would make LaHood particularly suited for that position, but hey, maybe we can get some better, ummm, transportation around here out of the deal. My only concern: How does this make poor old, job-shopping Rod Blagojevich feel? He has to be disappointed.
Posted by Dave at 12:18 PM