Under normal circumstances, I would not have had any problem with that pick. However, these are not normal times and Blagojevich has no moral authority (even if he does have technical legal authority) to fill that senate seat. 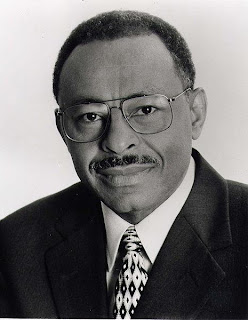 I’m a little surprised that Burris is accepting the appointment. Considering his previous condemnation of Blagojevich’s actions, I figured he’d refuse the offer. I don’t know all that much about Burris (he used to sign my paychecks when I was a student worker at SIU in the early 1980s), but he is showing no class whatsoever by accepting this position from Blagojevich. I don’t know, maybe the thought of getting to round out your career with a stint in the U.S. Senate was too much of a temptation.

There are plenty of roadblocks that can be thrown up to prevent this appointment from going through. Secretary of State Jesse White has to sign off on it, the U.S. Senate has to actually seat Burris, etc. Let’s see if people like White, Dick Durbin, and Harry Reid have the balls to actually stop this travesty.

In the meantime, shame on you Roland Burris.

Update: Secretary of State Jesse White's office says it will block the appointment. Good on Jesse.

Update II: U.S. Senate Dems says they won’t seat any appointment from Blagojevich, including Burris. Looks like Blago is getting a big FAIL on this one. Not that he will care or even notice.

Update IV – Congressman Bobby Rush, at the governor's side and speaking in favor of the appointment at the press conference, is making this all about race. What an ass. Did I hear him ask us not to “lynch” the appointee for the deeds of the appointor? Hey Bobby, Pat Quinn can appoint an African-American too. Even Roland Burris! This isn’t about race, it’s about Rod Blagojevich. What a flaming moron Bobby Rush is. Just wow.
Posted by Dave at 12:22 PM