The Cost of Blago

Rod’s refusal to leave could be costing the state money:

SPRINGFIELD - Signs emerged Thursday that the bombshell corruption charges against Gov. Rod Blagojevich are beginning to affect the operation of state government.

The Standard & Poor's credit rating agency put the state on a credit watch at the same time officials were in the midst of borrowing up to $1.4 billion to help pay a massive backlog of bills.

In a statement, S & P credit analyst John Kenward said the legal charges against Blagojevich "may challenge the state to respond to this fiscal situation on a timely basis."

Any change in the state's credit rating could result in higher borrowing costs, which eventually affect taxpayers.

"If the state were downgraded, it would mean the state would have to pay significantly more," said Sara Wojcicki, spokeswoman for Illinois Treasurer Alexi Giannoulias.

The treasurer's office estimates a worst-case downgrade could cost taxpayers an extra $2.3 million if $1.4 billion were borrowed for six months. 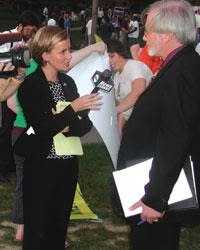 The big story here for me is that yet another Ch. 20 alum, Sara Wojcicki, has become a state spokesperson. Does Wojcicki's new employer know about this?
Posted by Dave at 7:16 AM