I don’t know how much there is left to say at this point, but if I think of anything Blago-related I’ll park it here. 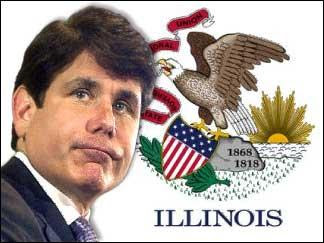 Tuesday evening, about 10 hours after the news of Blagojevich’s arrest broke, Mrs. TEH told me she thought the story was an embarrassment to Illinois. I took some exception to that and told her I thought it was really only making Blagojevich look bad. But as I watched the cable news shows and late night comedians, I quickly realized she was right. Everyone really is laughing at the State of Illinois. How many years is it going to take us to shake the most-corrupt-place-in–the–universe reputation?

Update: The governor showed up for work yesterday in Chicago, but what “work” did he actually get done? Is there any State business that can be done in a vacuum? I mean, no one is going to even take a call from this guy much less assist him in governing.

Update II: I remember when I was living in Chicago there were tours (like this one) you could take of old gangster sites in the city. Can we get something out of this Blagojevich mess and have a Gangster Blago Tour of the various Chicago buildings where he and his henchmen hung (still hang) out? For now, all proceeds would go to some sort of impeachment fund. After we finally blast him out of his governor’s chair, a private concern could run it for profit.

Update III: Obviously what Blagojevich is alleged to have done is WAY over the line, but does anyone think that there’s not usually some sort of political quid pro quo in things like filling vacant Senate seats? It’s kind of hard to get the politics out of, well, politics. Doing it strictly for personal financial gain is another matter entirely, of course.

Update IV: I’m not saying Blagojevich is a Nazi, but his holding up in his Chicago office “working” reminds me of Hitler in the bunker in his last days issuing orders to armies that no longer existed.

Update V: Listening to Pat Quinn’s press conference, I thought I heard him say he would live in the governor’s mansion here in Springfield (it was hard to hear the question). He has a Chicago accent so I’m sure he hates Springfield anyway.
Posted by Dave at 7:11 AM

The laughing at Illinois will stop after 4 more years....starting January 20th.

OK big O, we get it, you have an irrational dislike for Obama. Have something more substantive to say or be gone.

Commenter above has to be Kelm or Kirk (my money's on Kelm). They're the only ones who still think "The Obama" is clever or unique,....or an insult.

Nancy,
There is always bible-liar RickMonday who hasn't posted since he was wrong again about the McCain winning the election. I think he was responsible for some of the more racists posts.

I will now threaten to nuke Iran....who is The Obama?

dave I stole your blago pic

I'm sure I stole the pic from someone else. Honor among thieves.

Yes, Pat Quinn said he WILL live in the mansion, AND he will review the Traffic Safety and Pontiac Prison move proposals.

And, as an extra added bonus, he says he will reopen all the closed parks and historic sites (which do, after all, have money appropriated for them, which Blago simply refused to release)

This should be VERY good news for Springfield and all downstaters.

I strongly suspect that one of the ways in which Quinn, when (it's not a matter of "if" anymore) he becomes governor, will attempt to differentiate himself from Blago will be by being extra nice to Springfield and downstate.

For what it's worth, I had a couple of minor contacts with his office when I was working for a daily newspaper elsewhere in Central Illinois. I must say his staff seemed to be more on the ball than any other I dealt with, and returned my phone calls more promptly than any other state office did.

Yes, he's a grandstander and he's famous for having press conferences on Sunday afternoons when nothing else is going on (for maximum publicity.) He's not going to be perfect by any means, and he does have people in state government who don't like him.

But, I hope he can take the "Lt." out of his title sooner rather than later and (to borrow a phrase from Gerald Ford) put this long state nightmare behind us.