Over the weekend, somebody hacked into the "Miley and Mandy Show" YouTube account and pretended to be Miley Cyrus' friend Mandy Jiroux.

"Hi guys, this is Mandy and I have some very sad news," said the fake Mandy.

"We're very hurt to tell everyone this, but Miley died this morning after being hit by a drunk driver . . . R.I.P. honey, we will miss you so much."

The message was set to the tune of "Goodbye," which E! describes as Miley's "weepy new single." (I wouldn't know because I'm one gender and three decades away from being Miley's target audience.)

So Miley joins the ranks of stars who have been the victim of sudden-death urban hoaxes. The list includes actors who played the Beaver (killed in Vietnam) and Urkel (suicide). Also, Eminem (car crash), Britney Spears (car crash, overdose), the guy from "Blue's Clues" (overdose) and Will Ferrell (paragliding accident).

I had not heard about the Miley hoax, but I also hadn’t heard about any of those other examples except the Beav’s (Jerry Mathers) early demise at the hands of the VC.

The one celebrity death rumor I remember best involved Henry Winkler circa 1975 who had just hit superstardom playing The Fonz on Happy Days. He supposedly died of a drug overdose. I was in my early years of high school and remember hearing the rumor while riding the bus home from school. I was shocked. Needless to say I believed the rumor. Even my parents use the rumor as a cautionary tale about drugs. 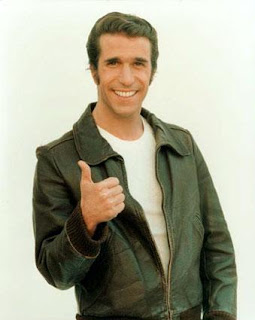 The internet can spread rumors faster these days, but it can also quell them as quickly. In 1975, it was largely all word of mouth. So, the Fonz-is-Dead rumor persisted around here for at least days if not longer (I don’t remember) because we lacked a Snopes or Fonz fan website. Today, a Miley fan hearing the bad news on the school bus could whip out her iPhone and despnse with the rumor on the spot. Or choose not to and wallow in the horror of it all.
Posted by Dave at 7:16 AM